Wind Magic (風の魔法 Kaze no Mahō) is a type of Caster Magic and Holder Magic that utilizes the elements of wind.

This variation of Air Magic enables its users to generate wind, as well as to manipulate the wind around them at their will. Wind Magic grants them high offensive power, allowing them to assault enemies in different ways: the most prominent aspect of such Magic lies in the ability to give the wind cutting properties, manifesting it in the form of fast-moving air blades which are employed at mid-to-long range;[4] they can also generate powerful gusts of wind to inflict blunt damage upon enemies and send them flying away,[5] and even form hurricanes of various scales, which, in addition to their rotational power, seem to retain his wind's signature sharpness.[6] Many of this Magic's spells seem to require special gestures which are performed with one or both hands, depending on the attack's power and magnitude.[4] However, users also seems capable of producing minor, yet accurate, blasts without the need of moving their hands.[7] Users can also employ the wind on themselves, using it to levitate[8] and traverse over long distances,[9] as well as to cover themselves in an armor of wind, boosting both their offense and defense.[10] 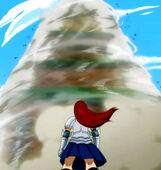 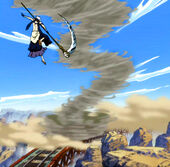 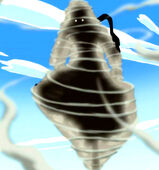 Roar of the Mom