White Shadow Dragon Mode is an ability that can be gained by either a Shadow or a White Dragon Slayer after having eaten their opposite element: in the former's case, light and shadow for the latter. Once the light and shadows inside their body fuse together, the user gains the ability to use both elements simultaneously. The appearance of the user is also altered, half of the affected's body becomes cloaked in shadows, whilst the other half remains normal in appearance.[1]

This ability can be further amplified by the concurrent use of Dragon Force, as shown when a White Dragon Slayer entered the ultimate state before making use of the shadows he obtained. In this instance, the scales associated with Dragon Force became pitch-black, as did part of their hair, on the user's left side.[2] 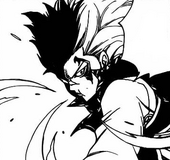 Retrieved from "https://fairytail.fandom.com/wiki/White_Shadow_Dragon_Mode?oldid=1026324"
Community content is available under CC-BY-SA unless otherwise noted.