White Dragon Slayer Magic allows its user to transform the physiology of their body into that of a White Dragon. Consequently, this Magic allows the user to both produce and control light from any part of their body, which can be used in both close and ranged combat. Sting refers to White Dragon Slayer Magic as "Holy" and "Pure," as if it were a "light of justice."[1][2] Despite being an element that specializes in light, the name of this Magic is apt in the regard that the user is able to eat and properly ingest anything that is white, be it a white-colored arrowhead[3][4] or Magic that is, in and of itself, white as well.[5]

According to Sting, he can eat light-elemental things as well, thus giving the user quite a wide range of substances to eat to boost their strength.[6] If a White Dragon Slayer is somehow capable of successfully eating shadows, they will enter White Shadow Dragon Mode. In this form, the shadow and light will fuse, and the user's attacks will possess the properties and destructive ability of both elements.[7] 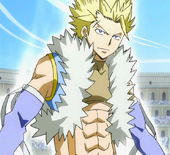