why does it say here here animaltamer7?

Because Reli decided that his jobs will be counted in January, then congrats:

yo! i just learned today there was voting for admins! unfortunately i don't meet the 200 articles requirement but i hope you get the spot! and what happened to the old admin?—This unsigned comment was made by AsuraDrago (talk • contribs) .

Happy belated birthday son!! I'm sorry I forgot. Papa will get you great gift when he gets his laptop back. Gomen!!!!!!!

Yes... I have taken ep 164 for summary :P Are you happy now?? I'm really looking forward to it ^__^ I hope they do it well. But already, what the heck have they done to Kagura's sword?? I was really annoyed because whilst colouring you present (which I am still finishing >.<) I couldn't get official anime colours for her sword, but now I see it doesn't matter, cause they look nothing alike D:<

Oh, and you're forgetting something :P I thought that's what you were messaging me about, but it wasn't ( .__.) I'll let you figure it out :)

Yeah, the anime does change things, but I like to use their colours in my art because I find them far more consistent than the colours of the manga... I mean, look at Kagura's talk about her ever changing hair and eye colour XD Plus, the anime usually has very nice colours... I like the gold they made her eyes :3

As for the fight, yeah... it'll be expanded to fit the time frame D; Hopefully they do a good job of it >___> But Kagura annoyingly does seem to get thrown about a bit :/ Ahhh well, guess we'll have to wait and see ( .__.)

Anyways... I have more presents to finish ( .__.) I was meant to finish yesterday, but I ended up just screwing around with that Kagura image the entire time :/

Second response: Doesn't Mega have a girlfriend in real life?? I wonder what she'd say if I stalked her down and showed her this?? >:D

Third response: What the hell is a Wiki date?? 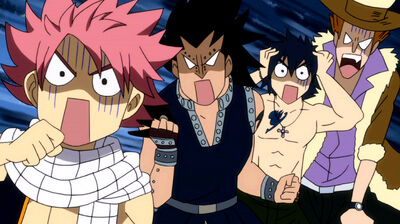 I already said no!! ლ(ಠ益ಠლ)

Sorry to bother you, but I thought I should ask before proceeding. I was thinking about making an article on Eclipse as there isn't one at present. However, I wasn't certain about whether I should proceed with it and also whether the article should be titled Eclipse or Eclipse Gate or something else. What do you think would be the best course of action?

WOOOOO! WE GOT A NEW ADMIN HERE! lol great job! and good luck!

Mega, hurry up and do Erza vs Kagura vs Minerva! and also post Grand Magic War Games! taking too long... >_< Relikz

Yeah, but lock it for rollback Relikz

org your scaring me what are your talking about—This unsigned comment was made by Elementaldragonslayer (talk • contribs) .

Megato be honest you want me to change my avi—This unsigned comment was made by Elementaldragonslayer (talk • contribs) .

k so am i good cause dude i am toattly scared but i posted a new laxus pic on my profile is it ok—This unsigned comment was made by Elementaldragonslayer (talk • contribs) .

And omega thanks for taking it out with me bro—This unsigned comment was made by Elementaldragonslayer (talk • contribs) .

Hi, I thought for this event the name was supposed to be Grand Magic War Games..? at least that is what written in here.. Grand Magic Game is too broad, could misinterpret as the whole GMG 'nstead of day 5 only.

The first half of the kanji is similar with Grand Magic Games.. So it's suppose to be Dai Matō Enbu 'nstead of Dai matōu Enbu.. The only difference in the kanji is the last syllabel, Grand Magic Game uses the kanji 舞 for dance. But, I can't say if that romaji has already been verified by Chaos.

???? I don't understand ur reply. I'm talking about the romaji not the translated name.

What r u disappointed about. I'm the one who's supposed to be upset when U did all that talking while u don't even know *hit about what I'm talking about. This is the 2nd time u did this to me.....

I'm sorry but I have no idea what you are asking. Are you saying that some characters have Unison Raid listed in their pages when they don't have it? Relikz

Oh now I get you. Yeah, uncategorized spells go in the Magic section of the infobox too. And no, someone just messed up when creating those galleries Relikz

Mega, when you make mass edits on pages (like what you just did with the wikipedia link), please mark the edit as a "Minor edit" so that its easier to see edits by other users Relikz

Hey Mega. Wassup! I just wanted to let you know that I'm going inactive for around 2 months in a week and a half (will return around 15 March) because of university exams. I'd like to remain in the LUT project, but seeing that exams are not in the "exceptions" anymore, I don't know if this is affordable. If not, it was loads of fun working in the LUT! If it is, I look forward to working with you guys again in March.

In any case, there are still 2 weeks remaining. I just thought I'd let you know in advance (I also did the same to Carrot and Ultra for the ASG and GG) so, see ya around I guess!

No prob! And sure that's ok by me. Raven

Hey Mega! I noticed that no one added new info on Ooba Babasaama page, mind if I add one and will you double check if it right when I add, since I saw Mirajane vs Jenny (I watched EVERY single episode even OVAs.) and I heard Carrie likes you since I was bored and read Carrie-sama's talk page XD. (psst she still likes you? O_O) and no one also never add about second day match: Mirajane vs Jenny '-' btw my eyes is in pain but whatever.

PS. what mega all message have been sent with sig inproving

Thanks Mega! How did you know that Gokudera was my second favorite Reborn character?! What font did you use? It looks really awesome so I'm going to have to use it :P. And don't worry, you are my favorite and only nephew! Relikz

ok let me me keep it simple when your about to license the pic it says licensing and you chose lkecopy right or genral,manga,anime and etcthat-- I♣K♣E 00:37, January 9, 2013 (UTC)

Hi Mega! can you help me with an image.....how do you make a screenshot better High Quality (HD) :D

I saw that you had already archived those profile pic discussions, so I thought on giving a small help. I didnt know that I couldnt. Sorry for it and thanks for the heads-up ^^ Martios (talk) 19:21, January 9, 2013 (UTC)

Hello, i've came up with a new tempate for the main page portals and want to get your opinion on it. this format allows us to have all the really important characters and still on use the same amount of space that we already use on the front page.DalekSupreme13 (talk) 23:29, January 9, 2013 (UTC)

okay then how about this? i only put daphne because she was a main villain for a filler arc and i could't find anyone better. juvia was a main character and a member of team natsu during the tower of heaven arc and was a major villain in the phantom lord arc. she was also part of fairy tail team b in the magic tournament and is gray and lyon's love interest.DalekSupreme13 (talk) 06:14, January 10, 2013 (UTC)

Hello! I noticed that you reverted my video additions to the episodes page and just wanted to let you know that we had received permission from Rauleli to add them. Would you prefer them to be put somewhere else or organized different? Let me know, thanks!

Thanks Mega! Didn't reply on the day because I had an exam yesterday. Take your time. FUOH!!!

Hey, no changing my image descriptions bitch ಠ_ಠ And yes, I added all of your silly categories... happy?? And do you have a problem with me replacing the images? >:D

As for Zeref, you do know that she just starts at the top of the list and takes as many jobs as necessary straight down?? She probably just forgot... so don't be hard on her D:< I will defend every one of my Mages... so back off *scary eyes*

Mhm, mangapanda does screw the images over :/ Alas, mangastream is so slow in their release >__> You did edit that picture, and you're right, what is there did come from the bottom of your heart >:D

And no, I will defend Zeref, but you get no kisses... *rolls eyes*

Anyways, new ep is up ;D

Well, I have no words. That really sucked :/ Hahaha, after the battle was nicely animated though :) The JellalErza bit was really nicely animated actually ( .__.) I swear, there is a JellalErza-supporting animator who does all of their scenes, cause they are always nice XD

Anyways, off to write the summary now. Hope you enjoyed it more >___>

And, I have a quick request. Could you rollback and above lock the episode page?? It's just that I'm going to edit the whole thing and people will try and add in little spells or chapter adaptions and I'll get edit conflicts. Just for like half an hour, then you can open it again ;D Thanks

I know. Just that I liked it and I wanted it there. :P Relikz

Lol, no problem ;D Took me freakin' ages though cause of all the stupid characters that appeared and all the M&A Diffs I had to get >__>

It still need images though :/ Might you be able to get that one of Erza and Mils hugging?? We need it as a replacement for their reunion page anyways... and I'd like it for the summary :)

Fine then, you know, I wasn't relying on you or anything. Nup, all cool... the page can just stay image free until I get Rauleli. I mean, I'm sure he'd be willing to help me... he's so nice after all... </sarcasm>

ಠ_ಠ no kisses... what's with you and kisses anyways?? *leaves*

Lol, actually now that I think about it, maybe Hiro was giving 314 to you as a gift ;D I hope I get something nice for my birthday too * ^ *

Hey Mega! Since her page is locked, do you think it'd be a good idea to replace this with this in her appearance section?! I'd look something like this. Thoughts? ;o Miskos3 Message 08:25, January 12, 2013 (UTC)

Deleting redirects to make space for a move

Can you delete the redirect Talk:Main Page/Archive 1 and then move Main Page/Archive 1 to the deleted redirect's page? Someone (not going to reveal names) moved the main page and its associated talk to another main space, thus causing the talk page's archive to be under that main space, in which I moved by mistake. I know I risk getting blocked but I couldn't fix the problem no matter what I did so I had to come to you. Thanks if you do so. Evanalmighty (Talk • Email • Contributions) 10:54, January 12, 2013 (UTC)

Retrieved from "https://fairytail.fandom.com/wiki/User_talk:Omega_natsu2/Archive_9?oldid=449108"
Community content is available under CC-BY-SA unless otherwise noted.