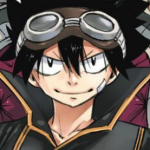 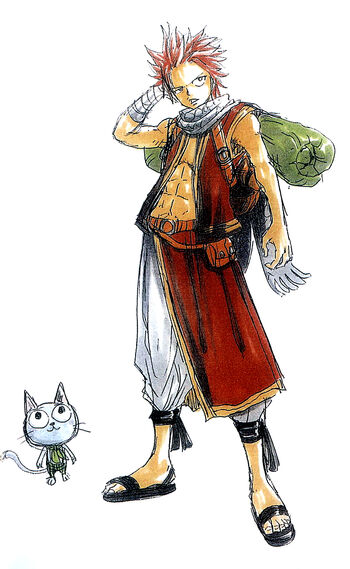 Hello I'm new here I am really a big fan of Fairy tail so I will need some help with things so can you give me some stuffs to edit I really want to be part of the community.

Hey Misk! How have you been doing....Father? Sensei? Penguin-Sama? Does role-playing even matter anymore?

Been a whole year since we talked here, even though we occasionally see each other on Twitter XP. The anime's finally back and the 100 Year Quest sequel started, so it kind of resembles three years ago when both manga and anime were ongoing. Despite now the wiki's not as lively as that time XP.

I'm finally in my last year, my break is coming up next week and since new episodes are airing I might pop up every here and there. Did some scribbles today. :3 The wiki seems to be holding up quite nicely, with on-time summaries and images and such. I don't know if I'll be uploading as well, after all you're doing a painstakingly great job yourself as always. XD

I heard that Wrath retired *sobs*, so - since Chaos is inactive - are you the only one from the five around these days ? I don't think Jake surfaces around often and no idea about TheCarrot. But the Council seems to be just fine ~~

Hope it's not that much to handle for ya. Aaand can I assume you work for a software company now? :3

Anyway, Cheers for now....Penguin-Oto-Sama Nailed it

My God that's not good XD Hmmm so it's safe to assume you're the wiki's sole ruler now >:D.

Oh and by the way, is the Magic Barrier getting a gif or is it irrelevant? I did create three (the fist, the summoning and the barrier.....sounds loosely like a movie's name XP) but I figured you're already working on them since you did say you'll make them some time later yesterday, so figured I should ask.

Might be a bit rusty but I enjoyed flexing my imagery skills again :D

Is it possible to lock Ankhseram's page since based on what happened recently people will keep moving it on their own basing only on the fan subs or Engrish & since the alvarez empire arc will make ankhseram a bit more prominent in the story i think it being locked will help lessen the unnecessary changes made by editors who believe they can change things on their own while disregarding the other editors of the wiki.LightningGeist

Ok, assuming they are to be created, can you create the fights for Mary and Briar? I have already written them at my sandbox and they've been dangling for quite a while. Plus is Arlock Mary's grandfather? :/ That edit has been going back and forth now and all what we have is her saying ouji-sama, that must be just her addressing him formally and I don't think they're related but thought I should confirm from you...

So that discussion about Aqua Metria has been open for a long time, and its been two months since someone actually said anything in it, so I want to close it down, no need to drag it much more since no clear answer is found yet. I mean, should we do a voting? Based on the three categories listed there? As a I see it, , and from what have been said there, the anime's adaptation of the thing will be the end word about it anyway, so there's no reason to keep it open until then.

So close it with or without voting, you say?

Yea that was actually more or less the main reason I wrote to you XP OK I'll remove it and....the anime episodes one remains? God that's a record time

I'm Sorry IF i caused some a "Awkwardness" or "Breach rules" or...etc. I am not good in english perfect, So Sometimes Do not watch out to some system/Provisions/Grammar. I'm bad in long Articles or Registration methods, so it rejected My edits or images. i'm not know why, But I sorry to Awkwardness/Disturbance. thank everyone.(Athena 10:52, December 6, 2018 (UTC))

Could someone put his anime debut as Episode 284 and in parentheses “mentioned.” — SoulRise99

Good Day Miskos3, i just want some clarification on what is the basis for adding the variations sections on magic pages, the way i see it, it was added based on what element or purpose that the said magic used? so in this case Water Magic has Water & Water-Make as variations since they all use water while someone added Fairy Law & Grimoire Law in the Law page as its variation since they all use law? but i think it would better to have it listed as its styles since it is still the same magic but more complete and personalized to the guild like how all take over are the same but are still slightly different.

This wiki also has the styles section on magic pages like how Take Over, God Slayer Magic, Molding Magic, Spatial Magic, Time Magic & so on have multiples styles since canonically they were described as that way. So all molding magic are under molding magic but some are variations of ice or water magic based on the element used.

Look at Plant Magic its variation is Plant but what about Green Magic & Vegetable Magic aren't they plants too. I just noticed it recently when one user kept adding various stuffs on the variation section of the magic pages and i feel like soon a lot of people will spam the magic pages and connect every magic from each other like snow magic is related to water, ice or wind magic or storm magic is related to lightning, wind & water magic or sand magic & sandstorm are a variation of earth magic and so on. LightningGeist

I also agree that its redundant and i like the idea of removing it throughout the wiki since majority of it will just be subjective and speculative compared to just having the styles format. Should i open up a discussion about it to see what others think? or you can just make an executive decision to outright remove them.

I also did some looking and based on the airspace magic page where it says it was a variation of air magic and after checking the referenced chapter 51 none of it says it was a variation of it but was implied that it is a kind of air magic similar to how requip is a kind of spatial magic so i think we should just follow the styles format having air magic as the umbrella term while wind and airspace magic as its styles since they are related to it.

And make it a rule that magic added into the styles list should only be added if the magic is similar to the umbrella term as a whole while still having minor differences like how take over magic are the overall the same while still focusing on certain forms, while transformation magic and take over are not the same since transformation just copies an appearance not take over them and a discussion must be made before adding new kinds of magic into the styles list. LightningGeist

What do you think miskos? Coz this user is back and still adding and removing variations of magic in the magic pages on their own and i personally don't know what this person's reason is behind all of it are all over the place adding magic as spells, adding objects as variations and adding abilities that were never mentioned as a form of magic as a variation of magic and just adding everything they can think of into whatever magic they think fits it disregarding the official and canon informations.LightningGeist

Ok after talking to godisme in the discord, he convinced me to not remove the variations since it's a good addition to the page and we just have to discuss or double check if what is being added in it make sense or not. So now i think we can leave everything the way they are and just open up a discussion for any magic variations to be added or changed.LightningGeist

Honestly i didn't get it lawl, all i know is that we'll just leave everything as it is and if a new one is needed to be added or removed it should be discussed coz overall we don't have a written rule or policy about it.

Oh ok lol ima do the appropriate changes meaning the umbrella magic page will only have the variation section while the magic listed on them will not have it. I'm gonna go ahead and implement it and feel free to double check. LightningGeist

hey can make a battle artilcle for acnologia vs the dragon slayers thanks —This unsigned comment was made by Sdion81 (talk • contribs) .

Good day miskos, starting monday next week, i will be away for a month due to a family vacation, so its very likely maybe 80 - 90% of the time i wont be able to help out the wiki and will be temporarily inactive. If im lucky i can check the wiki for a very short time but i wont be able to help with the major editing like the anime episode page & images, updating the latest chapter page and other needed pages and looking out for vandalism especially wikiafanatic who i can describe as aggressively editing the wiki and outright ignoring all of my messages in his talkpage. I mean that user really believe that they are a victim of bullying & we have a personal grudge against them for reverting all of that user's edits, when all that user does is not following this wiki's format, making outright speculative additions or just ignoring the official infos. Feel free to check that user's & my talkpage to see that ive been making efforts explaining and helping them be a team player but to no avail.

If i were lucky enough to be able to have internet access at best i can only check the wiki discussion forum and maybe do some minor reversion of minor edits. I just want to inform you about it coz the idea of leaving the wiki when i know that there are some active editors who kept messing up the wiki is nerve-racking. lol So hopefully when im back by mid february i can still review all the month long edit history and double check if something was overlooked but if not then ill just trust everyone. XD LightningGeist

hi miskos, I am ichigokurosaki09099, I came to say that in the page of gajeel redfox there is an error, he created in chapter 397 of the sleeve of fairy tail a new type of magic of dragon slayer, called dragon slayler of steel, so simplicity that paaina be corrected and that the dragons slayer page is also corrected. Thank you. —This unsigned comment was made by ichigokurosaki09099 (talk • contribs) .

Hey there. I was hoping to ask you guys on how you managed to get your wordmark to look so good as I am attempting to do the same for a new Fairy Tail RP Fanon since the last one has currently....uh, gone up in smokes. I was wondering if there was a program or something you used. -- Libratum Angelum (Embrace Light) 23:49, January 15, 2019 (UTC)

I'm an admin on the Prince of Tennis wikia (https://princeoftennis.wikia.com/wiki/Prince_of_Tennis_Wikia). Are you interested in affiliating? Chinkycandie (talk) 00:46, January 18, 2019 (UTC)

Hello. I'm an Admin for Banana Fish Wiki. I just wanted to tell you that we would like Fairytail Wiki to become an affiliate of Banana Fish Wiki, that way we can work together and can make the community a much better place for new users. You can visit our website here. Website here:https://banana-fish.wikia.com Website wordmark here:Banana Fish word mark

Retrieved from "https://fairytail.fandom.com/wiki/User_talk:Miskos3?oldid=986552"
Community content is available under CC-BY-SA unless otherwise noted.