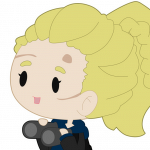 Yeah, i updated it so at least it will fit this wiki's format and added a reference so people would see it and not assume its fan fiction even though it only existed in the anime. LightningGeist

Just want to remind you that this wiki doesnt add trivias about a character being the first or last or whatever chronological order they appeared in the series. As shown in our manual of style policy trivias should be actual facts that can be referenced from an official source and not just something from a viewers point of view. LightningGeist

Good Day Isa2431, Unfortunately we only add information once it was outright confirmed in-universe and not just being hinted similar to how fairy tail couples like sherria and ren, cobra and kinana and alzack and bisca were officially revealed as a couple and bisca & alzack officially revealed to now have a daughter, cana is gildart's daughter, ultear is ur's daughter, natsu and zeref are brothers and so on. Just like how shippings are never seen as facts unless outright declared by the manga, levy being pregnant is just being hinted but never outright declared by levy, gajeel or anyone else.

Once the official manga officially declared it then it will be added, this will also avoid speculations based on the author baiting the fans especially when its related to shippings, let us wait for more chapters that way once the info is added a reference will be included making it an undisputed information. LightningGeist

Retrieved from "https://fairytail.fandom.com/wiki/User_talk:Isa2431?oldid=1003932"
Community content is available under CC-BY-SA unless otherwise noted.