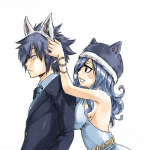 I'm sorry to hear that you're having such issues. It can be tough in these cases when people feel so strongly about a certain pair. I think you were wise to contact a neutral party, and I'll do my best to provide my insight.

To state my opinion straight out, I think this couple should remain in the fanon section of the Wiki. I say this for a number of reasons:

Second, I will address the points that the person brought up in defence of the pair:

So, this all stated and my opinion given, I stand by not allowing LaxusCana to be moved to semi-canon... not at least until some startling evidence presents itself. So far, I see nothing that does just that. Again, if anything I believe there to be more evidence towards LaxusMira, but that is my own opinion.

For the person placing the claim: just to ease your thoughts, I do not really ship either LaxusMira nor LaxusCana. None of the three are on my favourite characters list either, so I play no favourites based on preference.

I hope this helps, and the best of luck sorting through the issue ^__^ If you need me for any other reason, just contact me again and I'll try to help.

I did get a laugh out of the MirajaneLaxus cover this week though XD Man, what a coincidence~ :P

Retrieved from "https://fairytail.fandom.com/wiki/User_talk:Cinnamon_sugar?oldid=765621"
Community content is available under CC-BY-SA unless otherwise noted.