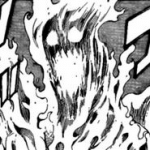 Hi, I'm Wrath. Unless it is a subjective case in the introductory paragraph of the article in question, or it is something written in the history section, please keep all articles in the present tense as best you can. Obviously there are case-by-case bases, but that is the rule. Thank you.
Wrath

Just a quick note to say that though the character summaries you are writing for the latest chapters are fairly good in terms of content, you are still writing them mostly in the past tense, when they should be written in present tense. What's more, we already have a team here dedicated to writing these summaries, and though we don't mind others doing them, in this case they are going to have to go clean up what you are writing anyway, which can get tedious. I would suggest reading over the Manual of Style before continuing with your summary writing.

Thanks in advance and if you have any questions feel free to message me. Oh, and don't summarise Jellal... he's MINE!!

Hello there. While I do see that you are trying to help with updating pages, we actually have a dedicated team on the wiki who have their own system with editing the articles. It would be greatly appreciated if you let the team follow through with the editing or else it would mess up the tally system. Thank you for understanding.
:Umnei:

The team does not have any vacancies yet. On that note though, it seems you are still editing in the past tense and not referencing your articles correctly. Please make sure you understand the manual of style and referencing here. It seems you've been warned a good amount of times where repercussions may have to take place.
:Umnei:

Again, we don't write in past tense. We write in present tense. I'm not going to have to warn you again.
:Umnei:

The 4th Gods of Ishval? Please take time to read before you make your edits, and please, listen to the warnings given to you. Otherwise, you'll be blocked again. Thank you.
✪ User Page ✪ User Talk ✪ 06:40, 7/14/2013

While we actually appreciate your effort of creating this page, there are actually things you could have done to make it better:

I guess just those, yeah, those... if I didn't actually forget something >_> Well, I just hope you keep those important things in mind and do them the next time you try. Anyway, don't be down just because you didn't do it perfectly this time. There's always another time. :) That's all. If you have any question or trouble, feel free to ask me.

I'm here to ask you to stop asking on the talk pages of articles if something was a Unison Raid. If it was not said to be a Unison Raid it is not a Unison Raid no matter what it may have looked like. That's how it is. King of Uncool 10:02,8/19/2013

Talk pages aren't for questions. They're for proposing changes to the articles and discussing those changes. If you want to ask questions, there are other places to do it like the Fairy Tail Answers Wiki. King of Uncool 10:09,8/19/2013

You are making the same mistakes again. I implore you to stop or else you will be banned yet again and I know you really hate that.
--Fairy Tail Grand Master<F.T.G.M. >

Let's not continue this battle on a talk page shall we?
--Fairy Tail Grand Master<F.T.G.M. >

Why am I blocked?

Uh excuse me seniors out there. I was kinda wondering why was I blocked? Is there a good reason behind this? I have done nothing wrong here in this wiki nor have I offended the veterans like all of you guys. Do you really have to block a newbie like me? Please answer. Thank you!--AtlasFlame206 (talk) 14:48, October 15, 2013 (UTC)

Because you made this account just to get around your ban.
--Fairy Tail Grand Master<F.T.G.M. >

No it's some sort of misunderstanding here, I only knew Warmachine after you mentioned him in your comments on my blog. I even mentioned that I took a sneak peek on his history as in his talk page and comments on blogs too ya'know after you mentioned him the part of keeping an eye on him few days ago. I really don't know him, honest just curious of him after noticing your comment about him as if you want something to do with him. --AtlasFlame206 (talk) 15:01, October 15, 2013 (UTC)

This is injustice! Why did I get involved with you?! Did I ever insulted you or the other admins? No I know how to respect my elders and superiors back at college! I simply started a friendly conversation in one of my blogs about expectations of FT anime's glorious return then you block me? Man I thought seniors shouldn't be that abusive to newbies and should be role models to people like me when I first joined this wiki. --AtlasFlame206 (talk) 15:14, October 15, 2013 (UTC)

You know, you really should stop coming online until you mature some more. Your extremely poor lying is evident as you already said on a blog that you have seen him from your work in other wikis. Look, I'll even quote you "But I noticed that he's been improving just a little bit on other wikis I've been affiliated with." So stop bullshitting and do something worthwhile instead of causing trouble for the wikia communities. I know you are a fan but you are doing more harm than good by being here. Just face facts, wikia is just not the place for you and I think I'm speaking for all wikis when I say this. Its best you go to some social site.
--Fairy Tail Grand Master<F.T.G.M. >

This is truly unjustified! I have no connections or dealings with Warmachine, I was blocked because you old people think I'm him! How ironic, the admins block me with no concrete evidence at all! I was being nice, played by the rules and now you block me! At least block which may expire in next year or more if not enough. Please don't do this to me :'( --AtlasFlame206 (talk) 01:27, October 16, 2013 (UTC)

Pretty please release me from my block

Uh guys, if any of the admins reading this, I would like to say that I'm sorry for having provoked you with my messages about the block but I'm saying that I'm the one and only AtlasFlame who is independent and not related to or connection with Warmachine you people think I am. Please discuss with me about this topic pretty please. I badly want to be free from this infinity block if not in your decision just set the expiry block to next or three years. I humbly plead for your mercy. Thank you. --AtlasFlame206 (talk) 03:03, October 17, 2013 (UTC)

Stop acting. You say that this is your first time hearing about Warmachine, but in one of your conversations above you clearly state otherwise.
FTGM: "You are making the same mistakes again. I implore you to stop or else you will be banned yet again and I know you really hate that."
You: "Fine, just don't make me use my Dragon's roar you know."
Stop lying, or I'll be forced to lock your user talk as well. Further, you were blocked for several other reasons (bad edits; do not follow the layout guide) as well, not solely sockpuppetry.
Mega

I was sleeping. And there is no way out of this block, you know why you were blocked last time. I even gave you a second chance and you threw it out the window.
Mega

You left me with no other choice but to lock your talk page. You were given many chances, and you didn't use them properly last time.
Mega

Retrieved from "https://fairytail.fandom.com/wiki/User_talk:AtlasFlame206?oldid=627917"
Community content is available under CC-BY-SA unless otherwise noted.