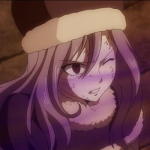 Does this page REMIND you of something?

You have encountered my talk page! Please sign with ~~~~(Or ~~~ if you have a customized signature), to respect this talk page. Please no spamming.

What a cute turtle. ^^
I have 2 as the matter of fact, but they aren't much cute as they used to be. (5th year having them so each of them is about the size of my palm XD) Dispelling

As long as it has a fair-use rationale and a license.
Wrath

Good looks for everything! --Ncduru

Because images are meant to be uploaded in high quality with all borders removed (if possible) and are supposed to have use outside of the galleries. Images uploaded solely for gallery-use violate policy. The wiki is not just a place to store images of FT; we're an encyclopedia and images supplement our articles. We aren't meant to just upload and host our "favorite" images or images we think should be featured in galleries.
Wrath

Images must have a purpose or be deleted. This means they must be used somewhere other than galleries, with some exceptions. That was not an exception. Therefore it was deleted. Unused images are not allowed.
Wrath

Couldn't manage not to take notice of your little conversation. Ness, you can reupload the image if you add it somewhere, e.g your user page or a blog, just as long as you use it somewhere. Preferably not on an article-page as the quality of the image, as Wrath mentioned, was pretty poor.

Just call me 4 next time, as I'm not really Ness from Earthbound, since I'm a girl. You can sometimes call me Ness.
4 Number loves Ness

Okay, so basically that image is retarded anyway. It offers no context to the actual paragraph (whenever it is written) because it's just Juvia reacting to Gray's chocolate; not exactly important. Article illustration means taking an important part of the character's involvement from the chapter in the form of an image and adding it to the article. The image does not fulfill synopsis requirements anyway... So no, if you just add it to the wiki (for real use, not just gallery use) and then don't add it to galleries you're still breaking policy.

Also, no one but admins and P&S is supposed to add the closed discussion template to pages unless there is express permission given for the discussion in question, and only that discussion in question. I'm gonna have to start cracking down on this, because regular users are not allowed to close discussion at all, even if there is clear consensus. There is a hierarchy that needs to be recognized.
Wrath

I know how the template works, alright? I just found myself in a hurry and thus I forgot to add "=result" before the reason. I've fixed it now.

Yeah....I'm just bored, so I'm just leaving a random message...and lol. Carry doesn't know who you are. I didn't recognise you at first too. 0FairyTail0

... is disrupting the wiki and its users. You continue posting in discussions with absolutely irrelevant comments that add nothing to the debate, basically spam. Moreover, something like your comment in my blog is rather inappropriate as well. Consider this your official warning as next time you may end up with a block. Thanks. Miskos3 Message 19:44, September 26, 2015 (UTC)

Yes, so long as you use the correct FUR and licensing. It would also be considerate to ask the artist of the piece if it is okay for you to upload their art here, but that's up to you to decide. However, make sure you have some purpose for the image. If you just upload it for the sake of it being on the site and don't use it, it will be deleted.

Paraphrasing Ishtak from the help page, because I can't be bothered to explain it a different way.

You have your code... What's next?! I will put everything in points:

Did you even read the direction I pasted? It literally tells you how to template your signature so that it doesn't appear as a mass of code. >_>
Wrath

Fyi, you aren't blocked as I ended up contemplating whether or not the page was needed and decided it wasn't, but next time you blatantly ignore an admin's authority I can guarantee that you will be.
Wrath

Even though you unblocked me, it still says I'm blocked... Ness

You have to follow the directions I posted and template your signature...
Wrath

SUBST is not the template. SUBST is the designation that allows you to post your signature on the wiki. Signatures do not work with the four tildes without it. You have to put your code into a template so that the template name is what is posted, not the mass of code. SUBST has nothing to do with why it's not working. You just aren't reading the directions I pasted properly.
Wrath

For the love of all things good and great, grow up and stop acting so damned immature. You're single handedly driving a good portion of the users on this wiki to insanity because of your rash and immature behaviour.

That anon on Rai's page is not stalking, nor harassing you. If anything your actions towards that second anon, as well as your attitude towards Wrath, is borderline harassment and most certainly not far off stalking by comparison. As harassment is by definition; any unwelcome comments (written or spoken) or conduct which: violates an individual's dignity; and/or. creates an intimidating, hostile, degrading, humiliating or offensive environment. That initial anon's comments were not in anyway directed at a single individual, especially not you, and the second anon's comments were not intimidating, hostile or in any way offensive.

Futher more stalking, in the manner you were accusing the second anon of, is defined as harass or persecute (someone) with unwanted and obsessive attention. If anything, you were stalking that anon and harassing them by using language that from an outside perspective could easily be viewed as degrading and humiliating to that individual. They were by no means stalking or harassing you. All you have to do is go back through his/her contributions to see that much.

All in all, you have already been told by Misk to actually start behaving in a reasonable and sensible manner or you'll be no longer welcome at this wiki. From what I've just seen on that comment feed, you've just turned yourself into an outcast, if you weren't one already. Congratulations. Derax Pagani

I'm not going to do anything. You are literally being ridiculous. Act whatever the fuck your age is, stop being butthurt, stop running to me and/or Misk for everything, stop censoring your words because you don't swear and then bitching about how you have to censor them, learn what words mean in the English language, stop threatening people with the 'great and mighty Wrath' because I didn't earn my admin rights solely to be your goddamned lackey, and most of all, for the love of pepperoni: Stop acting like a petulant fucking child. Last time I was super lenient. I've been really fucking lenient in general, actually, but I have had enough, now. I have been sticking up for you and talking people out of doing stuff towards you for the past 3, and I repeat, three months! No more! This is the final straw, so bye-bye. Let's make it official:

Retrieved from "https://fairytail.fandom.com/wiki/User_talk:4_Number_the_Ness_mainer?oldid=857034"
Community content is available under CC-BY-SA unless otherwise noted.