Saturday releases aren't too bad. Just remember: no chapter information on articles until the chapter is released on MangaStream, or Crunchyroll/Comixology. No exceptions!

Cover is Wendy in Irene's clothes. Which actually works for her. Curse you Japan for fetish-izing 13-year-olds.

So this chapter, while not good, is nowhere near as monumentally horrendous as the preceding one. Also, can I point out that unlike the last one, this one has humor that lifts it up, with both Wendy and Irene making jokes about their new breast sizes (Wendy making two of them, in particular). Anyway, we get some stuff out of this chapter, like Wendy having the potential to be on Irene's level of power. Initially I had problems with some developments herein, but taking a step back and looking around, Wendy, being an enchanter, and Irene, being a former Dragon Slayer, have that kind of compatibility where they both have the basic idea on how to use each other's magic, so the parts where they nonchalantly do stuff the other can is actually okay, if you factor in Wendy-Irene compatibility.

Let's talk about the lel-worthy part of this chapter, though.

And here comes my only problem with this chapter, and it's the huge one of Wendy enchanted herself into Irene's body, which is apparently something of an extremely high level. More than Deus Zero ever was. So in a sense, they should have switched bodies from the beginning, or Wendy and Irene should have shared a mind. This is about the only true dumb part of the chapter. The lower score in and of itself is because it's a continuation of a relatively pretty darn bad segment of the manga. Among one of the absolute worst chapters or development to arise from this entire series (wherein there are...quite a good number). So long story short here, Wendy, being an enchanter with Irene's power level, manages to force Irene out of her body and they switch, right after Irene starts heavily wounding Wendy's own body. So now, Wendy is out of the picture, and Irene is back in her own wounded body and is faced with Erza, who is still buffed from the Deus spells and has requipped into the flame pants. 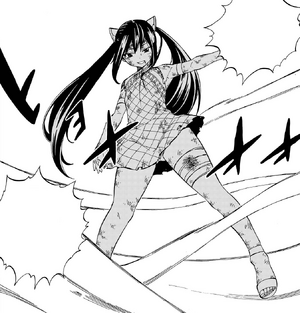 It's been a while since we've seen them used to defeat a boss character, so it's not like I am annoyed by this situation. It's just that I basically called it. Irene set herself up for defeat because Wendy can match Irene on all high-level enchantments, apparently. Irene herself proved that Wendy has the ability to do most of what she can while in her body, so let's just keep on promoting the malarkey of "potential" versus "actuality," right? :'D

Score: 6/10. Did you guys think it was good, bad, or the best of what could have been made out of this?

Retrieved from "https://fairytail.fandom.com/wiki/User_blog:Wrath022/Chapter_517:_Wendy_Belserion,_Review?oldid=951528"
Community content is available under CC-BY-SA unless otherwise noted.