Okay, so let's start with the fact that this was also supposed to be a double issue, the actual issue for this week goes on sale on Wednesday, the 28 of December. Chapter 516 isn't supposed to come out, if I'm right (pending a reply from Mangastream, or tomorrow's raws) until January 11, 2017 if it is. If I'm wrong, it is supposed to be January 4. Either way, do you see how fucked up that is? Yes? No? Whatever. I'm annoyed already because of how massively and blatantly illegal this is, but since there's no stopping Yonkou shit from getting on the wiki, here it is.

Sooooo the cover is just Lucy again. She may be my third favorite female character, but the covers are starting to annoy me with how simple they are. They're all predominantly the same. FT Girl in outfit that reveals cleavage, ass, or both in a sexy and/or suggestive pose that allows us to view said cleavage, ass, or both.

Anyway, the actual chapter was crap. Straight up garbage. First, ignoring the shoddy Englishing in places, Irene basically tilts herself with her own backstory, which is still stupid. She started telling this whole thing in a last ditch effort for self-redemption, which fails. I'm still trying to figure out why Erza is a Las Vegas, Playboy bunny hybrid. Her swords are cool, but other than that, I'm not seeing why this was even necessary when she has other armors that are less dumb looking, and accomplish the same goal. 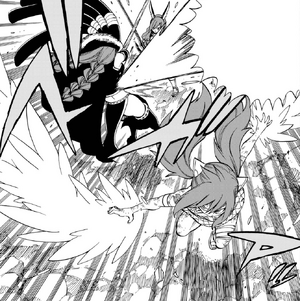 The art is really great. Sadly.

Anyway, Irene tries taunting Wendy about becoming a dragon, but then finds out that after the war was over, the remaining dragons found a way to ex post facto NTR the whole process, which makes her really pissed. I get her anger, but this is where things get super stupid. Erza manages to land a big hit on Irene thanks to Wendy, who can use enchantments on Irene's level, and then Irene reveals that it's normally impossible to enchant your personality over someone else's, but it can be done if they are compatible on a physical and magical level. Umm...okay, you can do this to Wendy but not your own daughter? Your own flesh and blood? I get why it can be Wendy, but the fact that it can only, just conveniently, be Wendy is irksome. So basically Irene does it after getting a pretty hard hit from Erza. She lays her personality over Wendy's and takes over the girl's body...at the cost of making herself weaker.

So Irene, in this process, makes herself weaker, and then opens the way up for the only way to defeat her. And we still don't know why Irene didn't smell like a dragon, or didn't use any dragon magic if she was still a dragon. Let's break this down though, shall we?

So long story short, no explanation on why Irene isn't using dragon magic, why she doesn't smell like a dragon despite still being one, Irene makes it so that the only way she could possibly be defeated is in the circumstance she is in now, where if her mind is killed, she dies too. Overall, backstory was crap, this chapter was crap.

And just so people can see, I think the Demon Seed is a horrendous, mishandled, retcon'ing, bullshit-ass piece of garbage that only seeks to continue to poison the already disgusting, polluted fandom with the idea that END is its own persona. The Demon Seed makes anyone with a brain question why Natsu even has a Book of END, yet also subtly explains away a lot of past errors in the series, such as every time Natsu has been hit by Devil Slaying ice. It essentially removes any sort of actual thought-out investment that the author has put into END by essentially making Natsu an Etherious who has never been an Etherious until Zeref conveniently shot a hole through Natsu's book. So the Demon Seed is killing Natsu because it's trying to fuse with the inert Dragon Seed, which means Natsu's body is struggling between remaining part-Dragon and turning into a full-fledged demon's. This is also dumb because, in tandem with the Irene backstory, it is trying to bring back relevance to the entire dragonification process, and force us to try to care more about Dragon Slayers, who are already extremely integral to the plot, when in reality it should have stayed buried in Tartaros: where it soundly ended. Honestly, this entire debacle shatters the plot. There are holes in the past, and there is no cohesive way for it to move forward. He has broken his own rules and tried to force the past onto the present with so much force that the actual story's ability to make at least a semblance of sense and indicate a general direction has all but disappeared. It is also creating the false tension that Natsu is going to die, which, newsflash, he will not. I literally have sat here waiting for this "mysterious identity" to find out that it's just a stupid "seed" that Zeref put in him to bring him back to life. Well sweet fucking Jesus, I have half a mind to think that Zeref knew this was going to happen since he is apparently so in touch with dragons and the dragonification process, but that would mean Hiro would have to be in touch with his own writing. Which he isn't. Happy New Year.

Score: 3/10. Art was the saving grace, but from the bunny armor down to the development of "Wendy Belserion," this was horrid.

Retrieved from "https://fairytail.fandom.com/wiki/User_blog:Wrath022/Chapter_516:_The_Truth_About_Enchantment,_Review?oldid=949674"
Community content is available under CC-BY-SA unless otherwise noted.