HEY GUYS! So, we had no chapter last week, but now, we are crash landing with Chapter 313! 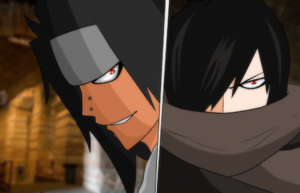 Now I know what you're gonna say: "THIS ISN'T FUTURE LUCY! WHY IS GAJEEL AND ROGUE THERE? TWO WEEKS FOR THIS?!"


Well the truth is, Future Lucy didn't have any good panels, and I tried Orga and Laxus but that failed, so I went with these two and I went back on my self-promise to NEVER EVER EVER color Gajeel in my life again -_-


So on with the chapter! This one was a dreaded SET-UP chapter =_= TWO WEEKS FOR THIS -_-


So basically, Future Lucy passes out whilst Lucy looks at herself for about the fifth time in the series and she finally realizes that she is covered in SPOTS O_O Just kidding xDDD Wait til she sees Bride-for-Bere Lucy (hehehe)


So after that, we go to the Three Way Yuri Well better than the Fodder Filler Knights at least where Kagura is angry at Minerva and tells her to release Milliana otherwise she will kill her. Now Now Kagura, just because Minerva raped Milliana before you, doesn't mean you won't get your turn -_- AND THEN! Minerva uses some unknown spell Well we should be used to this happening by now to switch herself with Erza. She then explains how the King moves the pawns around the battle and so on. Well if Minerva is the King, she's an ugly, bitchy one at that >:/


So, Kagura yells at Erza pretending to be Milliana's friend and everything, and says that she'll slash her along with Minerva. WELL excuse me Kagura, but

As well as that, we get some backstory with the keys and how Hisui stole them and opened Eclipse already. REALLY MASHIMA?! REALLY =_=


Oh we also get some other matchups!
Gajeel vs Rogue: GAJEEL YOU'D BETTER RIP ROGUE'S SHIRT OFF BEFORE I DO >:D
Laxus Vs Orga: WE ALL KNEW THIS WAS COMING! DRAGON SLAYER VS GOD SLAYER! WOOOOOOOOO! AGAIN ORGA, BETTER RIP LAXUS' SHIRT OFF BEFORE I DO >:{D
And as always, Sting is a GIANT LONER and prefers to sit around and let the others do the work xD

SO REMEMBER THE QUESTIONS OF THE WEEK! See if you can guess in my writing who won last week? XD SO, WILL THE THREE WAY YURI RAPING EVER EVER EVVVVEERR END? WILL ECLIPSE BE ACTIVATED, OR WILL IT BE LEFT TO SEND TO SOME ANTIQUE SHOP?! WILL WE EVER HOPEFULLY SEE THE LIGHT SHINE FROM ROGUE AND LAXUS' CHESTS'?!


FIND OUT NEXT TIME ON AMY'S COLORED PANEL OF THE WEEEEEKKK!

Retrieved from "https://fairytail.fandom.com/wiki/User_blog:ToshiroFanGirl/Amy%27s_Colored_Panel_of_the_Week!_(Chapter_313)?oldid=443560"
Community content is available under CC-BY-SA unless otherwise noted.