So after a break, there is yet another episode of Fairy Tail released! This one focuses on... 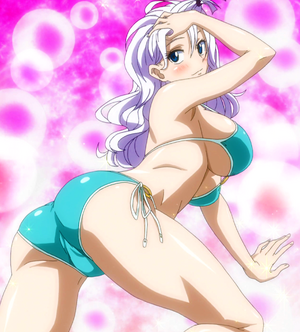 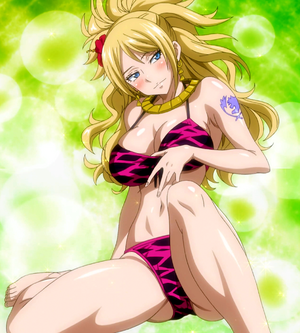 ... yep, the 'so-called' fight between Mirajane and Jenny, which, in reality, becomes a fight with the greatest amount of fanservice that the Fairy Tail series has witnessed. And guess what? The anime has gone even further and expanded the scenes!

But let's go from the start. There's an aftermath of Elfman's fight. Erza, surprisingly, praises mummy Elfman for his victory, while Bickslow ships Evergreen x Elfman. Meanwhile, Team Natsu goes back to the arena, discussing the kidnappers. Carla continues being useless and attempts to forget about her premonition.

Living up to its episode title, the next match up between Mirajane and Jenny starts. Carla attempts to be at least slightly useful (it's not working) and cheers for Mira, that is until she realizes this is not your usual fight, much to her surprise and all the males' boner. Being the models-colleagues, Mirajane and Jenny show off some rather provocative poses, in attempt to get points and ultimately win the 'battle' portion.

Then, a chaos ensues. The animators go crazy and have almost every female (Sorry Mega, not Kagura) go into swimsuit and we get to see a lot of asses and bouncing boobs. Sounds like a heaven for some people, eh? By the way, Mavis seems to be hiding a shitload of swimsuits somewhere in that robe of hers. I should probably mention Evergreen and Erza's little contest because that was... brutal, but hilarious at the same time. Those 'outfits' hid literally nothing.. But wait, that's not all! The anime decides to go farther, pulling some kind of a wedding contest. Now, this is a heaven for all those *insert random pair* shippers, right? I mean those people who get horny just seeing Lucy smile when Natsu is in the same room because that obviously means A NALU MOMENT!!! Also, lol at Makarov.. Mirajane could've chosen Laxus... I'm not gonna comment Lily with Asuka. I suggest you check out Ish' recent uploads to see all the images ;)

Then, my eyes started bleeding.

That's so horrible that even Photobucket couldn't stand the image and randomly resized it, I made it 300px big originally.

Let's move along, Jenny prepares a plan that uses Mira's young body for her favor, proposing a bet that gave everyone boners again. She then tranforms into her battle form, thinking she's the winner but alas, not really. Mirajane shows off her strongest Satan Soul, defeating Jenny in one hit and ending the.. 'battle' with a victory pose. Epic!

Elsewhere, Datong meets Arcadios who totally doesn't sound and look evil. They discuss Eclipse and other boring stuff while serious music is played.

In any case, the day 2 has almost ended, but before that, we have one more fight. Yes, it's Kagura against Yukino. The introduction is epic and it seems like they may expand the fight in the next episode (unless they called the episode 'Kagura vs Yukino' just to have the fight take 5 minutes). The next week can't come quickly enough!

Overall, the episode was.. well, how can I even rate it properly. I'm a man, after all. In all seriousness, ... no, sorry, I can't be serious enough.