Tfw you pull a Rai and press Enter after typing out the blog title, publishing it empty as a result. ( .___.)

Uhhhh anyway, a very early chapter is here, god bless Japanese holidays, I think? So as some of you may have read last week, I fired several nukes towards the previous chapter, as well as the final parts of the series. Does this chapter change anything? Does it actually accomplish something meaningful?

Obviously, a single chapter is not capable of cleaning up the huge mess we've been through, but this time around, it actually makes me feel more forgiving towards the whole August mess. A few things: 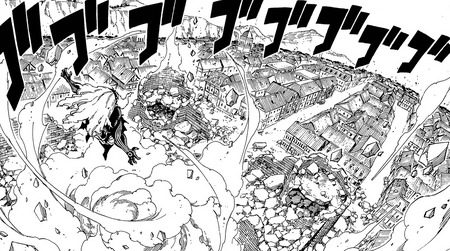 Yay? I mean, that was a pretty nice development as after the last week, I left it to my wildest dreams that August would still stand in this chapter. I guess surprises still do happen! Complaints that he literally didn't do anything till this point aside, August gets up and decides to blow up the whole friggin' country, along with himself. ISIS, take notes. #averybadjokeimsorry It does leave a bad aftertaste, but finally: August is going to do something befitting his title, the hype that he's received. Finally, August is trying to show that's he's not just a copy-cat that has to dodge Cana's cards to survive. An ancient magic that evaporates blood of living beings while melting the earth - as per Mavis' words - befalls Magnolia and - if we take August's threats literally - the whole Fiore. Well, that's pretty fucking epic, except, was there really any need to use something that destroys August as well? Especially when he clearly had the upper hand in the battle, as possibly the best that Gildarts could do didn't even scratch him?

Not many feats, but August was still pretty damn powerful in the end 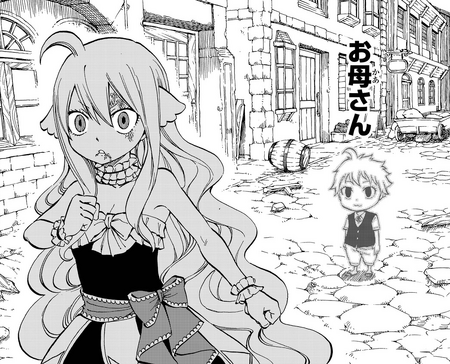 Well, this is the unfortunate fate of I-made-them-too-strong-what-now villains (read: Irene and August) in this arc: in a way, they retain their hype because nobody defeated them, but since they have to be pushed away for the good of the protagonists, they just... commit suicide. Family issues can truly take one's sanity. Or perhaps, with great power comes great responsibility is at play here as well? Ha, anyway, as one could've guessed, August's nuke is stopped as he realizes that it's also affecting... his mommy! Having literally predicted his own end, August's body evaporates as he wishes to be with his mother. Oh look, Romeo's fighting. Oh look, no one cares. I... am actually okay with this. I still wish we've seen more of August's abilities, but at least he went down undefeated, even if his on-screen performance was underwhelming. Besides, everything is better than the fight ending last chapter. I do think it's kind of sad that nor Mavis neither Zeref never found out about their son...

Your daily afternoon of literature 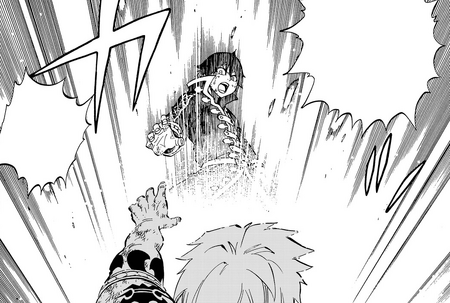 But wait, that's not all. Mavis has actually managed to snatch the book of the END! Not going to question how she knows about Natsu's true nature, I only have to wonder what is she planning to do... and I don't even want to think about it. Mavis has been pretty pathetic in this arc so far, to be honest. Fairy Tactician, my ass. She did more in the final day of the GMG tournament than during this war. But... fingers crossed for something interesting. 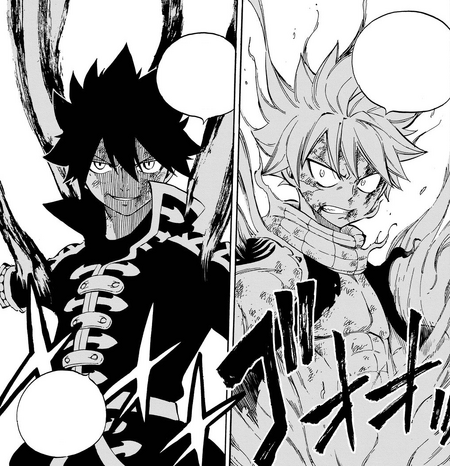 Finally, we're nearing the end. Only Zeref and Acnologia are left. And it looks like it's time to deal with the former. As Zeref pew pews Larcade (rip), Natsu calls him a brat. O boy, did that hit the target! This may have been the best thing Natsu has said in ages. And even the rest of his speeches in this chapter weren't as bad. In any case, I'm not too thrilled about this fight, but the last page had pretty damn epic art so I'm kind of looking forward to it now... A mistake? Perhaps. Whatever. ( ._.) 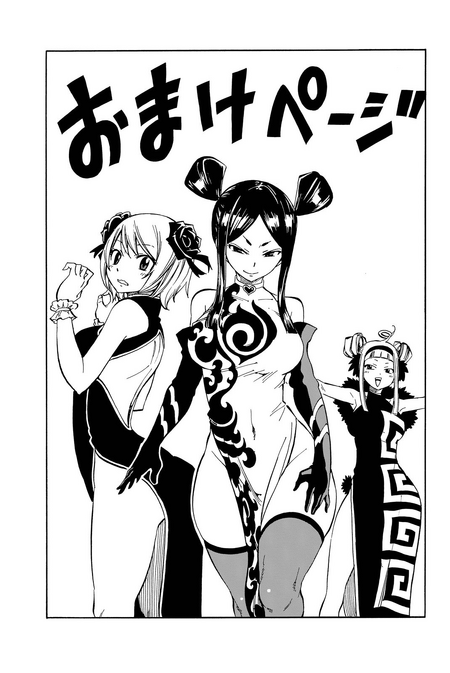 I'm not sure if this image has been shown anywhere before, but it's randomly inserted at the end of volume 60, so ... have fun with it? ( ._.) As for other stuff that the volume offers, in the Q&A, it's basically revealed that Lucy may show Capricorn's Star Dress in the upcoming movie. There is also an afterword which...

Someone, please, hold me. Mashima literally says that at the point of Irene confronting Acnologia, her connection to Erza wasn't even established yet??? Mother of asspulls... Anyway, if anyone wishes to read the whole Q&A and the afterword, head here for the translation.

Retrieved from "https://fairytail.fandom.com/wiki/User_blog:Miskos3/Fairy_Tail_527:_Emotion,_Review?oldid=957565"
Community content is available under CC-BY-SA unless otherwise noted.