Melee Combat is a fighting style adopted by several characters in the Fairy Tail series.

Melee combat is a fighting style which, as the name itself suggests, revolves around close-range confrontation, with users assaulting opponents physically. Widespread around Fiore, this form of combat can be employed by normal people and Mages alike. Melee combat can be performed both unarmed, with users assaulting foes with punches, kicks and other moves, and armed, with users wielding weapons of various kinds, and is thus divided in two main classifications: Hand-to-Hand Combat and Armed Combat.

Users of Hand-to-Hand Combat engage into melee confrontations employing unarmed moves. A variety of such moves has been shown, with the most recurring ones being different types of punches[1] and kicks;[2] headbutts, elbows,[3] knees[4] and palm strikes are also used to various extent.[5] Unarmed prowess, predictably, varies from user to user, with some being more experienced or physically prepared than others.

The way such form of combat is harnessed varies from user to user: some are shown to employ an aggressive, direct attack style relying on mighty blows[6] and body slams[7] while others prefer performing more fluent and acrobatic motions to strike opponents.[8] While most fighters aren't stated to employ any specific fighting style, some named martial arts exist:

Masters of unarmed combat possess the greatest prowess of all, being capable of easily taking on several opponents at once with ease. Some of them are known to employ hand-to-hand combat as the main element of their fighting style, and can overwhelm foes even if they are armed or larger than the users themselves.[13]

Expert unarmed combatants possess remarkable prowess in the use of such art, being able to use it to great extent, and to take on more than one opponent at the same time.[14] Some of them, while not employing hand-to-hand combat as the main element of their fighting style, are shown capable of holding their own against masters of such discipline.[15]

Armed combat, as the name itself suggests, revolves around the usage of weapons, which users employ against their opponents at close range. A variety of melee tools is commonly utilized throughout Fiore, with swords, coming in different shape and size (among which are longswords, sabers[16] and rapiers),[17] being the most common ones, and with other weapons being daggers,[18] spears,[19] staves,[20] axes,[21] whips,[22] scythes,[23] guan dao,[24] war hammers and kanabō.[25] Even curious tools such as oversized frying pans[26] and elongated nails[27] have been shown to be employed as weapons. Due to swords being the most popular weapons, Swordsmanship is a known discipline, with swordsmen found throughout the Kingdom possessing various levels of mastery.

Most forms of swordplay, similar to most forms of unarmed combat, aren't properly classified as specific fighting styles. However, so far, one named art of the sword has been revealed:

Masters of such art possess impressive swordplay, demonstrating great speed, accuracy and power,[33] and being capable of fighting several foes at the same time.[34] Many master swordsmen who are also Mages actively employ Sword Magic.[35][36][37]

Expert swordsmen possess advanced swordplay, enough for them to hold their own against several opponents,[38] or to slice things which are usually considered impossible to slash, such as spells.[39]

This category details Mages who demonstrate great mastery of other weapons besides a sword such as spears, whips, axes, firearms, etc.

This category details Mages who are able to expertly make use of other weapons besides a sword such as whips, axes, etc.

While the Mages were described by the Vanish Brothers as lacking the ability to fight at close range due to their time being devoted to studying Magic,[40] some Mages are in fact shown to be fearsome melee fighters, even specializing in such forms of combat.[41] Magic itself can be a valuable asset when engaging foes in close quarters, with many forms of Magic being focused around melee combat.

The various forms of Dragon Slayer Magic provide their users with many melee techniques that utilize the user's respective element.[42]

A full-body blow propelled and enhanced by flames

A lightning bolt striking in the wake of Fire Dragon's Claw

A much more powerful strike cloaked in lightning & fire

... and even grab bladed weapons unarmed

A basic transformation of one's arm into a blunt weapon with an extending reach.

By transforming an arm into a bladed weapon, physical blows become much more painful and deadly.

Wind increasing the cutting ability of a clawing attack 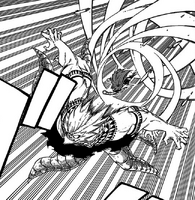 Sky Magic propelling forth its user, enforcing their blows

A lightning-empowered punch forcing back a Dragon

A two-handed strike enhanced with lightning.

Poison mist being released through a spinning kick

An explosive burst of light released in a punch

An open-hand strike from the shadows

Shifting in and out of shadow form while in close combat

Another form of Slayer Magic, Devil Slayer Magic, also allows its user to infuse their melee strikes with their respective element.[45] 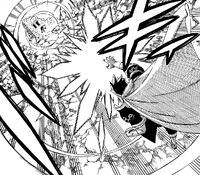 Take Over Magic can transform the users' bodies into that of creatures fit for melee combat.[14]

Using a powerful Take Over, a battle can be decided with a single blow.

A partial Take Over used in close-range combat

A caster swapping one partial Take Over for another between attacks.

A speed-oriented Take Over is used for swift melee combat

A large-bodied Take Over's mass can be used to great effect in melee combat.

Blades of ice can be used to strike in a fast, powerful attack

A much larger sword that forms ice in its wake

Twin blades that freeze when they cut

A kick enforced by Water Magic

Water used to boost the strength of a punch

Infusing a kick with water

Other Forms of Magic

Giant, used to increase the size and strength of only one arm for a powerful punch.

Growing an arm in a specific manner can simulate elasticity, allowing the user to attack from otherwise impossible angles

The user focuses all magical power into their blade, sacrificing all defense and striking a single, full-power blow

Rushing past their target, the user strikes in a cross pattern

Swords slashing in a pentagram pattern

A Magic-enhanced katana cutting through iron

Enhanced with Magic, a sword stabs cleanly through metal

An improved version of Paralysis Claw: Mega Jellyfish being used in close combat

The effects of Paralysis Powder

The light of Regulus, focused into a fist

Regulus, channeled through the foot.

A headbutt that discharges electricity on impact

Channeling a powerful amount of Magic power, the user strikes heavily with their sword

Writing runes on their back, a user forms a pair of wings, greatly enhancing their speed and maneuverability

After carving runes into their body, the user takes a demonic form fit for physical combat and capable of casting Darkness Magic

Writing on their own body, the user transforms into a knight-like form in darkly-colored armor, increasing their power.

By turning their body into iron, the user greatly enhances their physical offensive and defensive power

By transforming their body into cotton, the caster can leap high into the air to avoid and prepare attacks

Using an turned-iron leg a user can deflect enemy projectiles with only a kick.

After rising high up with Cotton Doll, the user become iron and drops down on their target from the sky

Enhanced by an ally's Fire Magic, the cursed individual is moved at high velocity, manipulated by another ally holding the cursed doll, and slams into their target while engulfed in flames

A user enhanced by Power Perfume destroying a large lacrima 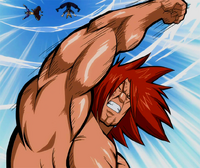 An uppercut thrown by a Power Perfume-imbued user.

An overhead strike infused with a powerful spell

Darkness Magic used as a pair of whip-like melee weapons 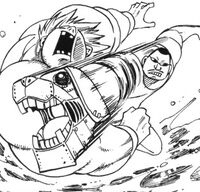 Retrieved from "https://fairytail.fandom.com/wiki/User:SasookayIsRlyCoo/My_Sandbox?oldid=1008629"
Community content is available under CC-BY-SA unless otherwise noted.