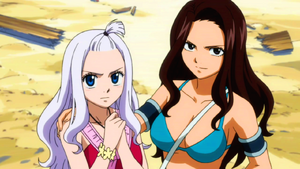 Manga • Anime • Others • Others

Tartaros Arc Prologue: The White Inheritance is the 236th episode of the Fairy Tail anime. It aired on June 6, 2015.

As Natsu and Jackal glare at each other, the Fairy Tail Mages recognize the bomber as the perpetrator who took down the Magic Council single-handedly. Jackal smirks and proceeds to do several hand gestures and generate power, causing the wind to blow and several explosions to emerge from the town they are in, successfully hitting all buildings in the vicinity. Shocked, Lucy quickly remarks that the town has nothing to do with Jackal's business. Natsu, on the other hand, proceeds to charge on to the Tartaros man, who attempts to counter the Fire Dragon Slayer with his explosion. Much to Jackal's shock, Natsu, who seemingly took a direct hit, eats the explosions, with Happy explaining his partner's affinity when it comes to Magic relating to heat and explosions. Natsu overpowers Jackal with his Magic and continues to repeatedly attack him. Michello shakes at Natsu's display of power, mentally saying that it is his first time witnessing a Fairy Tail wizard's fight against somebody.

Jackal tries to say something to Natsu, but the latter still continues to physically attack him - with the people around him saying that he is going overboard already. Michello, on the other hand, worries about Face, Tartaros' possible goal, that anyone on the Council hardly knows about. The former councilman panics and says he needs to take his leave immediately. The others find this strange, and Natsu asks him to tell them what he knows, to which he continues to reject.

Hearing what they conversed about, Jackal sits up from his position and proposes that if the old man shares some useful information, he might consider his goal of killing. Moreover, the Fairy Tail members display their shock as to why the man stood up, given the intense beating he took from Natsu. Michello insistently claims that he knows nothing and orders the Mages to dispose Jackal at once. The Tartaros guy stands up once again, and tells Natsu to listen if someone is talking to him. Afterwards, Lucy notices Natsu's hands illuminating with bomb marks,

Characters in Order of Appearance

Retrieved from "https://fairytail.fandom.com/wiki/User:Mamerge/Sandbox?oldid=810886"
Community content is available under CC-BY-SA unless otherwise noted.