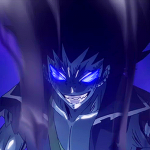 Iron.Shadow.Dragon (鉄影竜,Tetsueiryū) is a user in the Fairy Tail Wiki and the Founder of the Dragons Rioting Wiki.

ISD has an upredictable personality. When he is alone, ISD is always seen resting his eyes and sports a serious look in his face, but he is actually a friendly and happy person when there are some people around. He has a habit of habit of folding his arms. He also demands his friends to massage his back whenever he is bored.

Enhanced Durability: ISD has the ability to read manga and watch anime for a good amount of time, even reaching to as late as 5am just by watching anime and reading manga. He can sleep for just 5 hours and continue watching anime for the rest of the day.

Retrieved from "https://fairytail.fandom.com/wiki/User:Iron.Shadow.Dragon?oldid=631757"
Community content is available under CC-BY-SA unless otherwise noted.