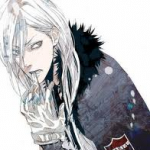 Some Info 'bout Me

My name is Hell Dog, but feel free to call me Alex. I'm 15 years old and at the moment own a two year old deerhound - Argon (haha *scratches head* I think I named him after a doctor from Artemis Fowl..wait, no, I named him after an element xD). I like to read books and manga, but lately I don't have much time to read either, because my teachers think their subject is the only one in the whole world. *coughs* Anyway, I tried to watch anime, but I never found it too interesting - to be honest, it kind of found it boring after reading the manga. Uhm...anyway, generally I'm a nice and friendly person, but, trust me, you don't want to get into a fight with me. I'm a little pessimistic, and like to spend time alone, but I can get into a conversation pretty quickly. In addition, as my sisters say, I am very similar to Yuu Kanda and Edward Elric. xD

Heart no Kuni no Alice: Julius.

Retrieved from "https://fairytail.fandom.com/wiki/User:Hell_Dog?oldid=590375"
Community content is available under CC-BY-SA unless otherwise noted.