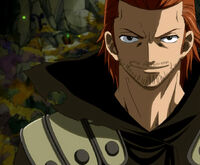 From the first time I saw the guy, I knew I liked him. He has had some of the best moments in the series comedy wise and I love characters that make me laugh. The best moment of him is when Cana says she is his daughter and he rattles off every woman he has ever been with, desperately trying to figure out which one is Cana's mother. I was nearly in tears laughing at that. Also, when he is making fun of Laxus for being excommunicated is another great scene. The guy is super powerful but also hilarious, which is my favorite character type. 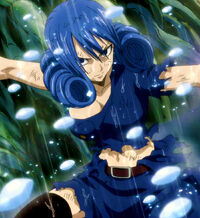 Juvia gets a lot of hate. I have seen some call her the Orihime of Fairy Tail, but frankly, I really like her. Sure, she says Gray-sama all the time but after watching 10 minutes straight of Kurosaki-kuns, I can handle anything. Juvia's unrequited love is quite frankly hysterical. Her wild imagination scenes always have me rolling. Aside from that, I love her magic. I am a big fan of water and water based attacks. I just wish Mashima would stop trolling her and show what she really has. She was an S-class mage of Phantom Lord but ever since she joined FT, she has not won a battle without help. I'd really like to see her put to better use.

Remember how I said I liked strong and funny characters? Gajeel fits that pretty well for me. He made a good villain at the start of the series, providing a counter to Natsu. But since he joined FT, he has been hysterical. His constant bickering with Natsu always has me cracking up and the scene where he gets Lily and is bursting into tears may be one of my favorite moments in all of FT. He also has the best dragon slaying magic imo as it is so non traditional. Fire, light, shadow, lighting etc have all been done to death in several series but metal is quite unique. 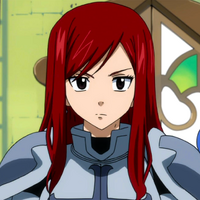 I wasn't really a fan of Erza at first. When she was first introduced, she seemed like she was going to be the bitchy tomboy and was going to annoy me, but I quickly warmed up to her. She can be quite entertaining due to a near complete lack of common sense. Her magic is also very entertaining to see. When she isn't using her plot armor to win every battle, she is a good strategist and every new armor she pulls out (again, aside from the plot armor) is cool to see. She is a female character done right in so many ways and I applaud Mashima for that. Laxus as a villain sucked. Fighting Festival arc is one of my least favorites. He was really really annoying as a villain. But Laxus as a good guy is pretty cool. Aside from water, my favorite element has always been lightning and Laxus puts it to good use. Him taking out all of Raven Tail was one of if not my favorite moment of the entire Grand Magic Games. He has so much loyalty towards FT now which is pretty cool. Also, now that he has taken out Jura, does that mean he would be considered for a wizard saint? Would be an interesting turn of events.