The Tower of Heaven (楽園の塔 Rakuen no Tō) which also known as the R-System is a taboo Magic structure[1] that can be used to restore life to a deceased person.[2]

The Tower of Heaven was formerly located on a small island on the coast of the Caelum Kingdom south of Fiore.[3]

Despite the Tower of Heavens general appearance in the manga, the anime portrayed the tower in a completely different way.

With it's twisted body and sporadically jutting sides, the Tower of Heaven appeared very chaotic and asymmetrical. The bottom and main body of the tower were comprised of overlapping and intertwining lengths of metal tubes, which wound together from the ground and straight up into the sky. These giant pipes were held together through a series of smaller tubes which linked the main sections, as well as many differently sized and shaped golden decorations, which looped over and around the frame of the tower, adding to its unruly presentation. Around the main form of the building, a twisted staircase wound, rising around the tower and leading to the throne room at the top.

The said throne room also added to the disorderly nature of the building, appearing as a giant green sphere encased in crystal. The surface of the sphere was uneven and blotchy, also being decorated with several red eye-shaped symbols, marked in a circle just above the rooms circumference. From this green sphere shot a large amount of sharp crystals, each separate column pointing randomly from the room and appearing to have literally grown through the sides of the walls. Keeping these crystals in place was a detailed metal band, which ran around the length of the room. Right at the very top of the tower, another little metal structure protruded, this being a twisted golden cone.

After the destruction of this main body of the tower, all of the metal present on the surface of the building completely disappeared, leaving the tower completely comprised of Etherion-charged Lacrima. This gave the tower a very spindly appearance, with just one main trunk of Lacrima shooting into the sky and a few limbs protruding irregularly from it. When the tower began to reject the large amount Magic power inside it, these spiny extensions (as well as the whole tower) began to deform, the Lacrima seeming to melt and re-harden into blotchy growths and giving the tower a more smooth, rounded and almost lumpy appearance.

In complete contrast to the anime's erratic take on the tower, the manga portrayed the Tower of Heaven in a much more orthodox way.

The Tower of Heaven was straight, neat and very symmetrical, the entire building being comprised of many differently shaped sections stacked one upon the other, many of these segments being built from brick and containing large windows and doors. The first layer was a octagonal in shape, having no windows or doors and reaching up quite high to be the main base for the rest of the tower. On top of this portion sat a much more detailed level, this one possessing long pillars upon which balconies sat, as well as huge windows. The third layer resting on this one had a very castle-like appearance, also being square, but with four cylinder-shaped corners with pointed cone roofs. In the middle of this square layer sat another octagonal level, this one accommodating a curved roof which flowed in a convex fashion from the ceiling before turning concave to join to the floor of the next room. This said room was also quite odd in shape, being square, but with it's walls slowly growing in a trapezoid fashion as it proceeded upward. Finally, as the top level, the tower possessed a cylindrical room, a few tall and dark spines sticking straight up from the top to complete the building in all of it's glory. Around the base of this massive structure sat quite a few far smaller, rounded towers, which dotted the coastline of the island, a staircase leading from them to the base of the main tower.

When the tower was struck by Etherion, it lost the entirety of it's symmetrical appearance, also becoming completely comprised of Lacrima. In this form, the tower fluxed inwards and outwards from it's base to it's tip, every now and again being completely overridden with huge chunks of crystal that jutted randomly from its sides; two huge sections from the top of the tower. The smooth, straight walls also changed, becoming bumpy and uneven, mostly due to the Lacrima appearing to melt in several places and run down the sides of the tower, this forming large stalactites which dripped from various sections of the building. Surrounding the tower in different places were a series of ribbon-like rings, these circling the building and hovering in place.

The Tower of Heaven, or "Resurrection-System" is a Magic Item that allows any person to restore life to someone who is deceased at the cost of someone else's life.[2] In the interest of protecting the order of the Magical world, the construction of the tower had been forbidden by the Magic Council since ancient times. However, a cult wishing to revive Zeref began work on it years ago. The cult kidnapped children and adults alike and forced them into slavery so that they could construct the tower.[4] Through the efforts of Erza Scarlet, the cult was defeated.[5][6] However, a possessed Jellal Fernandes, continued the construction after bribing Erza and forcing her to leave the tower.[7] By the year X784, he had completed the tower and was ready to use the tower. In order to, he needed a sacrifice with a tremendous amount of Magic Power and so he chose to use Erza Scarlet as a sacrifice to revive Zeref.[8]

The towers were a series of structures that Dark Mages tried to construct and use in order to revive the most powerful Dark Mage in history, Zeref. A cult that worshiped the Black Arts invested a large sum of money to initiate the building of the R-System. There were seven towers originally, but the Magic Council put an end to their construction, though they never found the 8th tower off the coast of the Caelum Kingdom.[9] The cult kidnapped many slaves in hope of using them to complete the tower,[4] using inhumane methods of discipline to keep the slaves in line.[10]

However, the reign of the cult came to an end because of a slave revolt in the year X776. It all started when a slave named Erza Scarlet was punished for leading an escape attempt by being tortured and losing her right eye in the process. Another slave and a friend of hers, Jellal Fernandes, came to her rescue and saved her, but he was captured by the prison guards.[10] Distraught at his capture, Erza led a revolt[11] to save him which was successful[5][6], but Jellal had been brainwashed by Ultear Milkovich, who he thought to be Zeref. So he bribed Erza and forced her to leave the tower and kept all the other slaves at the tower albeit with much better conditions and decided to finish the tower and use it to revive Zeref.[12]

Resurrection System: True to its nickname, the R-System or "Resurrection-System" allows any person to restore life to someone who is deceased.[2] However, using this ability does not come easily. To complete the process, an enormous amount of Magic Power is required; 2.7 Billion Edeas.[13] Not a single Mage can possibly produce that amount of Magic Power, as a matter of fact, the only thing that can produce that kind of energy is Etherion, a weapon owned by the Magic Council. Erza Scarlet stated that not even the combined Magic Power of all the Mages in the continent would be enough to produce such a substantial amount of Magic Power.[14] After receiving the energy it needs to be activated, the tower transforms into its complete form. A giant Lacrima[15] crystal that is blue in color.[16] However, even in it's complete form, it is not ready to use until it receives it's second activation requirement: a sacrifice. The person who is sacrificed must have Magic Power that is on the same, or at least very close to, the level of Magic Power of a Ten Wizard Saint.[17] The body of the person sacrificed is then fused with the Lacrima which is the whole tower itself. After fusing with the Lacrima, the body is then broken down and reconstructed into the body of the person that the R-System is meant to revive.[18] 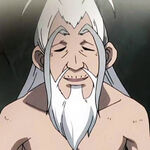 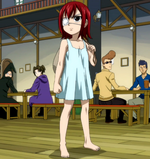 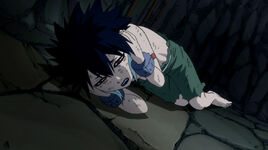 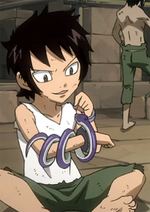 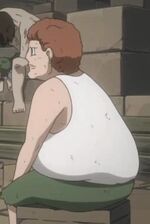 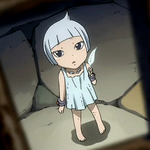 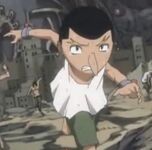 During the year X784, Jellal Fernandes had his subordinates, who, along with him, happened to be Erza's childhood friends, kidnap Erza Scarlet and bring her to this tower to be used as a sacrifice to revive the most powerful Dark Mage in history, Zeref.[8] However, Erza broke out of the cell they were keeping her in[19] and met up with her guildmates (Natsu Dragneel, Lucy Heartfilia, Gray Fullbuster, and Happy) as well as Juvia Lockser.[20] Natsu and co. had come to the tower to rescue Erza.[21] Upon meeting each other in the tower, they all went throughout the tower determined to fight and defeat Jellal and his forces and stop his plan. In addition to his subordinates: Simon, Shô, Millianna, and Wally Buchanan, Jellal had also hired Trinity Raven, a group consisting of three powerful assassins from Death's Head Caucus to assist him in his plot.[22]

Natsu and Gray fought Fukuro, a member of Trinity Raven who looked like a humanoid owl and who used Jet Magic and Absorption Magic. Natsu was defeated, consumed, and almost digested by him, but Gray stepped in and saved him.[23] Lucy and Juvia fought Vidaldus Taka another member of Trinity Raven who used Guitar Magic. Through the use of Unison Raid the two Mages defeated him.[24] Erza fought and defeated the leader of Trinity Raven, Ikaruga. She was a female Mage who specialized in Sword Magic and was powerful enough to destroy some of Erza's most powerful armors. Ikaruga revealed that the Magic Council was planning to use Etherion to destroy the Tower of Heaven. After defeating Ikaruga, Erza went on to face Jellal.[25]

Jellal and Erza fought and eventually Erza began overpowering him. Once she defeated him, instead of killing him, she pinned him down and said that she planned to die there with him once Etherion was fired at the tower. Jellal convinced Erza that he had given up on his plot and that he wished to die with her as well. The two Mages hugged as the council fired Etherion at the tower. After the blast was over Erza was surprised to see that she and he were still alive. At that moment Jellal used a spell called Bind Snake to bind Erza and he explained that it was his plan to have Etherion fired at the tower because he needed a lot of power to activate it. Jellal then pushed Erza into the tower's Lacrima walls in an attempt to sacrifice her. However, Natsu Dragneel arrived and saved her.[26] After defeating Jellal, Natsu collapsed from exhaustion and Erza was determined to get out of the tower so she attempted to fuse herself with it to stabilize it. However, the tower still exploded, and thus, it was destroyed. Erza, however, was not killed in the explosion because Natsu had somehow managed to save her and him from death.[27]

Retrieved from "https://fairytail.fandom.com/wiki/Tower_of_Heaven?oldid=448840"
Community content is available under CC-BY-SA unless otherwise noted.