Third Seal (第三の印 Dai-san no In) is a transformation that Bradman is able to access.

After the first two seals have been passed, Bradman alters his regular appearance into a devastating shadow-cloaked like figure that completely consumes his entire body structure. He becomes more demonic looking, with his entire body in a dark color light, with only his eyes a clear white without his pupils. His abdominal are shown while he has a shapely figure with legs and arms to go with his jagged shadow teeth. Once he calls for his "Third Seal" to be released, however, a white circle forms upon his forehead, allowing him to maximize his skill set at its full potential.[1] 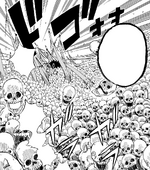 Retrieved from "https://fairytail.fandom.com/wiki/Third_Seal?oldid=914917"
Community content is available under CC-BY-SA unless otherwise noted.