Neutral - I don't really think that it would look great if we add another portal. Though maybe the Dragons of Design can think of a way to make it work? xD   B

Here's their talk page. You can also contact the "leader", Rauleli.   B

Actually, we're going to hold off on this for a while. I plan on having the Dragons of Design POSSIBLY redesign the Main Page. And when we do the redesign we'll add in a guild portal but a guild portal wouldn't look good with the current design.   ✦Rai✦  ✦Talk✦     15:05,6/14/2012

What's about a new Erza Profile Pic on the Site ? Lucy already has a X791 Pic.

Kodansha has released Volume 19 in English, and the following names have been given new spellings:

Also, still waiting on the confirmation that the name "Cuberos" has been changed to Cubellios in Volume 18. Immblueversion 01:13, June 21, 2012 (UTC)

Ehh.. Anyone noticed that manga title is still form chapter 289 while summary is form 290?

We should change Gray and Jellal's profile pics!

I think maybe we should change the profile pics of Gray and Jellal on this site and try more new and updated pics.I think we should change these two because they are two of the most attractive male characters in Fairy Tail and their current pics don't really show that off!Thanks!--210.4.65.12 11:42, August 24, 2012 (UTC)

I don't recall any discussion that brings this to mind, so I'll just announce it here.

From what's seen on the Main Page, there are two sections consisting of six portals each linking to different characters from the series. It appears that it's Protagonists on the top half while there are Antagonists on the lower half. Since that appears to be the case, why is it that Ikaruga is featured? Compared to the others (perhaps Ultear as well), she's a very minor character who's made significant appearances towards the latter half of one arc. I would propose that she be replaced with someone such as Brain/Zero. He is a major antagonist during the Oración Seis arc and I believe he would be better suited than Ikaruga to be on the Main Page in that particular area.
Glass Heart (GHeart) 07:35,12/29/2012

Support - Yeah... I was looking at that, too. Brain/Zero is a good choice, seeing as the antagonists are listed after the protagonist, and Brain being the main antagonist in the OS arc. Sleep time ( ._.)~.

Support - - for Ikaruga's change. I do remember at one point that it was said there needed to be some sort of a male-female ratio though. Angel is far more significant than Ikaruga... .:Umy:.

Support - Agree with your idea. Change Ikaruga to Brain/Zero since he is the main antagonist of OS arc. Rifatmfarid

Support - Alright, as long as Jellal won't be removed in there >:D Yeah, Brain's better to be there.

Oppose - If it's going to be replaced, it has to be another female antagonist in order to keep the male-to-female ration. And as Herme said, the DOD is going to redesign it later anyway. Relikz

Sorry you guys, but I'm going to have to close this vote. We have Ikaruga because, as Reli and Nei-chan have pointed out, there is a specific male-to-female ratio that must be maintained. And the last time I checked, Brain/Zero is not a female. >_> Ikaruga can be exchanged, but she can only be exchanged by another female antagonist.   ✦Rai✦  ✦Talk✦     19:38,12/29/2012

Angel for now and once Minerva is colored, can she be included there also? Just an early proposal. Hihi. KOKO

Support - Agree with what you said and I was thinking Mirajane should replaced with Lisanna instead since shes been part of the influence due to her "death" ..::ShinShinTo::. 02:43, December 30, 2012 (UTC)

Nah! Mira is far too epic and relevant than Lisanna. KOKO

Hey, now that Chaos uploaded HQ versions of the Slider's images, I decided to check it out and it came to my attention that the option "Locations" in the Slider isn't that cool :/ It redirects to Earthland's article, despite saying that it would be a "List of Locations" (poor Edolas). Also, it doesn't seem a very popular page (nor a veeeery important one, let's come) So what do you guys think about changing it? The Magic page sounds way more cool imo, but feel free to suggest another one.< Herme 23:45,1/17/2013

I'm up for that Relikz

Agreed; it should be removed. I think the Magic page will be a great substitution. Though some other good options would the Mage or the Arcs pages.

Agreed with the idea.

Makarov
Add a photo to this gallery

I picked some 9 options to be chosen. The idea is to have a non-awkward pic showing a main/important character casting a spell. Since I've tried all of these images in the actual Slider to see if they look good, and they all did, I'm in doubt for now :S And ah, if you didn't like any of these images because they are lame feel free to go fk yourserlf add another. Herme 16:38,1/21/2013

Support - I like all of them, however, Natsu's picture looks a bit awkward in my opinion. I've added two other. Let the others decide it.

Guys, this is not how it's gonna work because when people add other proposals then the voting is unfair. The discussion is first to find proposals, then we vote. In other words, all those votes up here don't count. Just suggest proposals. :P Relikz 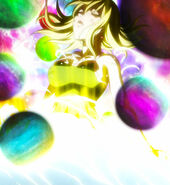 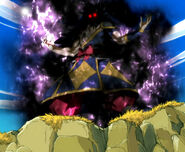 Idk... many of those images are messy - I mean You cannot really tell what is it... I think it should be something clear... eventually something obvious... Currently I think Freed is ok. STILL I will try to find something too... Ishthak

I thought so too; it needs to be something that will let people know that this photo is about Magic. As of now, I think Freed, Makarov, Hoteye and Aquarius are the best for that job. :P

Ish Angel
Add a photo to this gallery

I hope we can choose something nice. In my opinion it should be a character, casting magic or covered with his magic... So I vote

Nice proposals Ishy~ But I think they have to be rectangular so they slip in nicely... *blushes because I said "slip in"*.... but apparently, from the pics I've seen from ALL the proposals, Makarov using Fairy Law looks cool (Herme's) .:Umy:.

Well I can make them more rectangular, it's not a problem... Those are just proposals. I just don't wanna put another unnecessary images for wikia. Ishthak

OH I see, then Laxus would look cool~ I cant wait to see all the proposals and for voting to begin x3 .:Umy:.

I already make them rectangular so you can check it :D Ishthak

Ok so we are getting a bunch of proposed pics but I think that the image has to have the Magic centered. You guys are proposing too many images that have it at the side (like Herme's Ice-Make prop and all 3 Natsu's prop) and they look ugly in my opinion. I also think that the image should be something that screams out Magic, like Amaterasu, not just an effect that may happen naturally, like elemental Magic spells. And it has to be an anime picture, Mega >_> Relikz

Anyways, @Reli, my thoughts exactly. I also think that at least something Magic has to be shown (like the Magic Seal), not a static image like Lucy summoning Aquarius. So, the most suitable ones imo are Makarov casting Fairy Law and Hades and Makarov with their Magic Seals. Freed's rune is good, but it's kinda small :/

I said my opinion you whore >_>

Magic seals aren't necessary... they are anime-only either way. I don't see being static as a problem for the Aquarius pic, however, we can't see the key so for all we know Aquairus was there the entire time and Lucy is just shoving her hand in to the water (not really, it's just an example). We aren't voting yet Herme. Don't worry about sizes right now, just about the pictures. Sizes can change when we pick one. Relikz

Hades' magic
Add a photo to this gallery

Hades' magic
Add a photo to this gallery

So there are various that are really good proposals so since it's going to be hard to pick (at least for me), each of us should be pick 3 and then the one with the most supports is the one we use. My choices are: 1, 2 and 3 Relikz

In order of preference, I will be voting for Makarov's Fairy Law, Cana's Fairy Glitter and Natsu's Dragon Roar. But yeah, I'd like to stress my preference for Makarov because not only does the Magic he is utilizing appears ambiguous enough to embody the term "Magic", but he is a notable character in his own right.
.:Umy:.

Rufus, Angel or Makarov's Fairy Law are my choices.

Retrieved from "https://fairytail.fandom.com/wiki/Talk:Main_Page?oldid=456874"
Community content is available under CC-BY-SA unless otherwise noted.