This is probably fit the right category, but I keep thinking that it sounds like a Requip Magic than Transformation.

Most of the Transformation Magic I saw was usually changing the appearance and not the clothing... She has the same hair and maybe eyes...

And her summoning the sword, looks even more lie Requip... but I don't know.... just what I think.

In the 148th episode she is seen enveloping Natsu and Elfman with thorns that comes out from nowhere weakening them, so if this isn't plant magic I don't know what is it...

But looking at the 148th and 149th episode shouldn't this be considered Plant magic instead of some type of "cloth's ability"?

Although she called herself "Imitatia", her original form, which was a doll, was named "Michelle". In addition, everyone except from Brain II called her Michelle, including Lucy. Taking into account that the original Imitatia was the doll that belonged to Lucy, wouldn't her initial name still be expected to be "Michelle"? Or at least wouldn't it be more accurate to have only her fight form called Imitatia, in order to distinguish her from Michelle, the doll? FairyRaven

Though I don't watch the anime, I do recall that the "Michelle" who showed up at FT claimed to be Michelle Lobster but was not and we have an article for the real Michelle Lobster. Renaming this article "Michelle" could potentially create a problem with any redirects that exist.

Yes but near the end of the Arc, it is revealed that although she is not the real Michelle Lobster, she is a doll that Lucy named "Michelle" when she got it as a birthday present. I agree with you when it comes to the confusion part though..FairyRaven

So Michelle Lobster wasn't real then?

Here's how it is: During her childhood, Lucy acquired a doll, and she named her Michelle (not Michelle Lobster, just Michelle). Midnight brought the doll to life, and gave her the name Imitatia when she joined the Reborn Oración Seis. So it is in fact a nickname, like Angel, Midnight, and so on. Imitatia took the form of Michelle Lobster, and worked for Jude Heartfilia. So there are 3 of them: Michelle Lobster of the Lobster family, Imitatia, who worked for Midnight(or Brain II, whatever) and Michelle, Lucy's doll and the initial being behind Imitatia. I hope I made this mess clear (._.) FairyRaven

Resetting indent Yeah, I think I more or less got it. Till I actually finish this arc, I guess I'll leave this decision to you anime folks.

Imitatia is actually a code-name, as every member of Oracion Seis used code-name instead of their real name. Such as Cobra's real name is Erik or some speculation that Angel might be Sorano Aguria. So, I think we should put Michelle in alias but in bracket stated that its her real name. Messithemesser (talk) 13:17, November 13, 2012 (UTC)

I'd keep the main page as Imitatia but yes, like Messi said, put "Michelle" under real name in brackets. :Umnei:

I hate the anime. Gonzales is a last name for fuck's sake 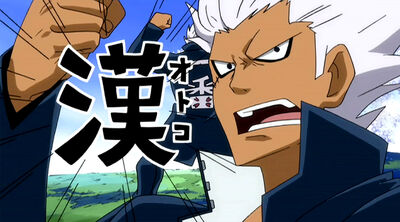 It sounds so silly. >_>
But it should be added since it's true, though.Dispelling

sigh then I guess it should be added. BTW, this does not mean renaming the page, it just means adding the 'real' name in the intro and stuff.

I am all sorts of confused

Well, maybe I am not confused, but rather I am trying to make some sense out of this nonsense. :D Michelle, or rather Imitatia is a doll... right. But it somehow remembers everything just like a living being. Was Imitatia a magic doll even before Midnight gave her life? I mean, even Lucy's father talks to her while she was still just a doll, like she has feelings or something, like it is more than a here toy. Since those memories could not be injected by Midnight and since she was just a toy before she was given life, how is does that even make any sense? Did the doll had some sort of memory lacrima or something? How does she even remember what happened to her before she was given life? If such a magic existed, people wouldn't need to be captured and interrogated as it was shown in the anime and manga. Could someone explain this? (and "because magic is not a good answer) --Sansuni (talk) 01:46, October 14, 2015 (UTC)

Retrieved from "https://fairytail.fandom.com/wiki/Talk:Imitatia?oldid=855026"
Community content is available under CC-BY-SA unless otherwise noted.