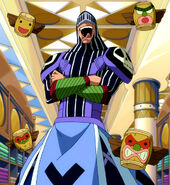 Current Picture
Add a photo to this gallery

If anyone would be so kind to clean this picture of its credits or tell me how to do it myself. I want to use it as profile picture. Thanks Rauleli 20:40, April 29, 2011 (UTC)

Well, while the picture would be better if the credits were gone, I'm still in favor of the current one because it's of higher quality, and displays what the proposed image is showing, but in better detail.  Iam...JakuhoRaikoben  21:00,4/29/2011

Yes, the current profile picture is better quality, but it is already being used as Bixlow's profile picture. Oh and I love Bixlows pose in the proposed picture. so if anyone would get a higher quality picture and clean it (im asking too much now right?) it'd be great Rauleli 21:13, April 29, 2011 (UTC)

Asasyn has uploaded a new high quality version of the image you proposed so it has been added as the profile pic.  Iam...JakuhoRaikoben  12:09,5/1/2011

Retrieved from "https://fairytail.fandom.com/wiki/Talk:Human_Possession?oldid=1003909"
Community content is available under CC-BY-SA unless otherwise noted.