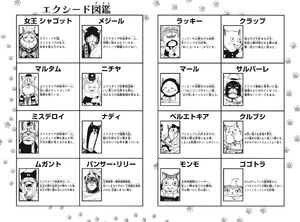 Translation of each one, starting from the top left box and goes down:

Retrieved from "https://fairytail.fandom.com/wiki/Talk:Exceed?oldid=664449"
Community content is available under CC-BY-SA unless otherwise noted.