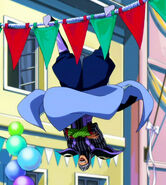 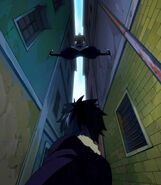 Which image should be used to show Bickslow's acrobatic skills? 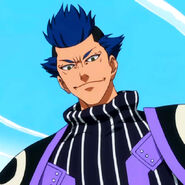 In this image, Bickslow's face is shown without his tatoo, which isn't anime only because is also seen here. In the manga, the tattoo disappeared when he closed his eyes which nullified his Magic. So wouldn't the tattoo be part of his Figure Eyes as the only times we have seen his tattoo, or his face, is when he uses Figure Eyes.

Leave any comments or creative response on the comment section BELOW. I'm Rauleli, and I approve this message.

Actually, here the tattoo is visible despite Bickslow being unconscious and thus not using his Figure Eyes...

Though, to tell the truth, Bickslow's tattoo remained "active" back then, but is nowhere to be seen here... Mashima's mistake?

Probably, but I LOVE that image, Bickslow's face looks so awesomeistic. And I also just noticed that in the introduction of his newest appearance, a little bit of the tattoo can be seen.

Yup, I noticed that too, but I left it out from the Appearance section, partly due to forgetfulness and partly due to not believing it very important... And lol, the image with Freed and Bickslow in the termal baths is by no means one of my favourites, it makes them look so GAY xD

It's a public bath!!! No gayness there!! Relikz

It's probable that it is an effect of the Figure Eyes, but it isn't technically described. Like, whether the tattoo appears when he utilizies his magic or if he can turn it off and on at will... we don't really know :P but do what you guys think is comfortable~
.:Umy:.

i dont know if im allowed to propose a change to an article's quote but im doing it anyway and if im out of line then just delete this header.

current quote: "I don't have weaklings for nakama. Ain't that right, babies?"

that quotes describes his personality from when he was first introduced but after the fighting festival arc he changed to the kind of guy that respects his guildmates no matter how weak they are (dammit mashima) so i think his quote should be changed. i propose we change his current main quote to one of his other quotes, which are:

1: "From the start, we never had plans of doing this fair and square. Now, we're going to take you down." (To Rustyrose in "The Boy Who Stares at the Sea)

2: "Sometimes, the courage to leave a comrade is necessary!" (To Wendy in "Anti-Link")

so yeah plz tell me your opinion, personally i

*Reli comes rampaging in when he sees there's a Bickslow discussion* Anyway, #2 is is anime-only so it disqualifies as a suitable quote. #1 Sounds as epic as he is, it shows his personality when he says he never had plans of doing this fair and square, and he is going to take Rusty down. Awesome. But I'm neutral right now because the current one has the babies part in it.

Oppose - More or less the same for me. :/
Wrath

Support #1 - The babies are always with him and I doubt there are many pictures of Bixlow in which they can't be seen, so I don't think it's strictly necessary to have them in the quote as well. But his mental state and his values are better portrayed by the first suggestion.

As Cpt. Canuck said Bixlow changed and the current quote no longer fits the way he thinks after that change. NoNickNeeded (talk) 08:41, July 31, 2013 (UTC)

Tbh, I feel that neither portray his personality very well, and pictures have nothing to do with quotes. His "babies" are always with him and they are a part of who he is. The first suggestion isn't even self-explanatory; quotes are meant to be clear and relate to the reader a situation which sticks out in their mind and defines the character themself, such as Ultear's plethora of dialogues before her "death", or Future Rogue's quote. Something such as a monologue would work better, but he doesn't really have those. And about the second one, like Reli said, anime...
Wrath

But the current quote does not define his character any longer, since he changed. He isn't that cold-blooded person only concerned with strength that this quote came from any longer. So you just gave a good argument why it should be changed. While the suggestions might not be perfect, I think they are still better than the current one. NoNickNeeded (talk) 12:26, July 31, 2013 (UTC)

I never said that it shouldn't be changed, I just said that the proposals weren't all that great. Just because something is a tad outdated does not mean we immediately change it to the first thing somebody proposes, even if the answer isn't immediate.
Wrath

Oppose - The second is definitely out, and whilst I do agree that the first is slightly outdated I don't see how the proposal fits at all :/ The current quote is very Bickslow, and the proposed seems more forced imo. Also, you're going on about how the current isn't nice because it says that Bickslow is a meanie who hates weak people, but the second is just saying that he's a guy who doesn't fight fairly ^__^" Plus, I think it portrays his personality less. If this passage I've typed even makes sense (she's tired) then you'll see why I oppose. ☆°・*CarrotSays...*・°☆ 11:59, July 31, 2013 (UTC)

Nope there are no conditions

1 - I like the proposal. I think the current one doesn't fit him at all anymore, and if it's for the babies part, better find a more suitable one than this o.o I'm not too bothered if the quote doesn't include it though as it's probably clearly mentioned in the article. Miskos3 Message 14:50, July 31, 2013 (UTC)

Neither - IMO I think it's better to change it, given that that quote was said while Bickslow was still portrayed as an antagonist. But, I don't think these two quotes really reflect Bickslow's personality change from antagonist to minor protagonist. Basically I'm all for changing it, but I really don't like those two quotes. ― rollies talk to me! 16:06, July 31, 2013 (UTC)

...So you oppose then?
Wrath

To be honest, although I agree that the current one needs to be changed, I like neither of the proposals, so I'll have to

Support - that Bickslow's quote definitely needs to be changed, but I

Oppose - the proposals as they both suck. >_> To be honest, I think Bickslow just needs to have his quote removed until a suitable one comes along. Jakuho

Neutral - Quote needs to be changed, proposed ones are horrible.

So we have conflicting ideas, and this will just make it easier to sort through it all. Just support what you think should be done, I guess (I'll vote later).
Wrath

Support - Wrong. His personality hasn't changed since he was introduced as far as I can see.

Really? So Bickslow is still the asshole weakling hater that would attack his nakama? -__- I wasn't aware... Jakuho

He did it out of respect for Laxus and that hasn't changed. if Laxus would tell them to do it again, he would.

If you believe that's the case, then find a quote showing respect for Laxus. Any reader seeing the current one, would think that the current quote is showcasing a disdain for weaklings, because that's what the quote is about. You're reaching whore. Jakuho

The current quote is fine and if not, at leas the proposed is.

Oppose - Bickslow is no longer a weakling hating asshole. Jakuho

Support - I support the change, and I don't mind the #1 proposal, but yeah, those "babies" are a big part of his personality, so removing it doesn't sound so good. So to make everything neutral for me, I'd be supporting this one.
Tokeiza No Tobira ♔ 18:39, 8/1/2013

Support - The entire purpose of the quotes is to show the character's personality. The current one is a definite no no, and the two proposals are really only slightly better. When we initially decided to have the quotes, we said if there wasn't a quote that perfectly described the character's personality, we wouldn't put a quote on that character's page. So, let's not put a quote here. If we find one that fits Bickslow, we'll add it. Until then, let's remove his quote. Jakuho

Oppose - I don't see any changes in personality since he was introduced.

Support - I like his babies but I don't feel as though that captures everything that a quote should at this point, and I do not really like proposal. Needless to say, Reli will probably find a new quote in like 3 days and this topic will be reopened. ;P
Wrath

Oppose - No babies no way--God

Retrieved from "https://fairytail.fandom.com/wiki/Talk:Bickslow?oldid=843670"
Community content is available under CC-BY-SA unless otherwise noted.