Sword Magic (剣の魔法 Ken no Mahō) is a Holder Magic involving the use of swords.

A Magic which, as the name itself suggests, is focused around the use of swords, with those weapons acting as mediums for the user to perform particular attacks.[1] Many of such moves are shown capable of going past the physical reach of the blade employed in their use, threatening foes at short-to-mid range. Some Sword Magic techniques seem to involve the use of elements commonly found employed by elemental forms of Magic, such as Fire Magic[2] or Water Magic;[3] in addition, the user can also remotely maneuvre several swords at the same time. A number of different blades can be employed for such Magic, with the most recurring ones being longswords[4] and katana.[1] In some cases, certain moves might even involve the change of the sword's properties, such as its length.[5] 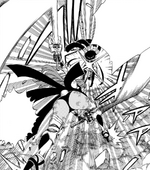 Retrieved from "https://fairytail.fandom.com/wiki/Sword_Magic?oldid=951356"
Community content is available under CC-BY-SA unless otherwise noted.