A Celestial Spirit Magic Spell in which the user incorporates the power of the Celestial Spirit they summons into their body by placing the key of the Spirit in question on their chest. The power manifests itself in the form of a wardrobe change (similar to Requip), this case in the form of a dress centered around the Spirit in question's own wardrobe.[1] Also, the user, by adopting the powers and appearance of the Spirit they so choose, also adopts a portion of their powers, being able to make use of their Magic and use it the manner they so choose. This adoption of power, however, is not limited solely to the Spirit's Magic, but also includes their Magic Power itself, which allows the user to make use of spells of their own that may require more than one person due to the tremendous amount of Magic Power required to cast it.[2]

This unnamed form was bestowed upon Lucy by the Celestial Spirit King, and once in it, Lucy took on an appearance based on Aquarius' own, having acquired a bikini top that sports a zigzag design; frilled, dark sleeves that are secured around her upper arm by a ribbon; and a frilled, dark miniskirt; around said miniskirt is a ribbon that is tied in bow to keep it secure. Additionally, Lucy's hair becomes tied up in pigtails and she is given sandals to wear. Aquarius' zodiac sign is located between Lucy's collarbone whilst in this state. This allowed her to both consciously and unconsciously make use of her friend's powers. The surge in Magic Power Lucy obtained from temporarily taking on Aquarius' form allowed her to, all by herself, cast the powerful Urano Metria.[3]

By incorporating the power of Loke into her body, Lucy becomes cloaked in an elegant, frilled black ball gown that sports a white sash around her hips; black, frilly sleeves; a black, frilled choker; and a ribbon with the mark of the Leo zodiac emblazoned upon it between her breasts. Around the chest of her dress are more white frills, and around the midsection of the dress are white lines that curve around her bust, bisect her lower torso, and curve around to her hips; additionally, Lucy sports black heels and her hair is now tied up in a quaint bun that is decorated with a black flower. Due to having taken on some of Loke's power, Loke's zodiac sign appears upon Lucy's right breast, and she becomes able to use Regulus in a manner similar to Loke: imbuing parts of her body to do enhanced melee damage.[4]

Lucy incorporates the power of Virgo into her body, which grants her a dress very similar to Virgo's own (albeit shorter in length), however due to its lacking the entire shoulder and most of the upper arms, the apron is now a pattern on the front of the dress; Lucy also receives a more frilly version of Virgo's headpiece, and still has Virgo's collar, albeit with the strings that are on Virgo's headpiece tied in a bow knot around it. Additionally, Virgo's zodiac sign is located on Lucy's right shoulder. While in this form, Lucy gains access to Virgo's Earth Magic and can tunnel through the earth just like her.[5] 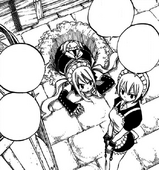 Lucy incorporates the power of Taurus into her body, which grants her an outfit consisting of a bra and sleeves with a cow pattern and pants that leave her right leg entirely revealed. She also dons a pair of gloves and boots as well as a belt and a bag around her waist. While sporting this dress she uses her hair in 2 buns, one at each side of her head abut also leaving some hair hanging. Lucy also carries her whip with her in this form.[6] While in this form, Lucy gains Taurus' great strength.[7] 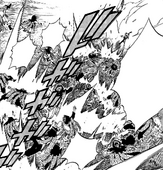 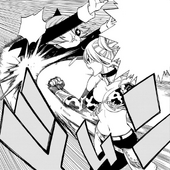 Retrieved from "https://fairytail.fandom.com/wiki/Star_Dress?oldid=829345"
Community content is available under CC-BY-SA unless otherwise noted.