A Celestial Spirit Magic Spell in which the user incorporates the power of a Celestial Spirit into their body by placing the key of the Spirit in question on their chest. The power manifests itself in the form of a wardrobe change (similar to Requip), in this case in the form of a dress centered around the Spirit in question's own wardrobe.[1] Also, the user, by adopting the powers and appearance of the Spirit they choose, also adopts a portion of their powers, being able to make use of their Magic. This adoption of power, however, is not limited solely to the Spirit's Magic, but also includes their Magic Power itself, which allows the user to make use of spells of their own that may require more than one person due to the tremendous amount of Magic Power required to cast it.[2]

The user can also combine their star dresses into one, this is known as Star Dress Mix ( Sutā Doresu Mikkusu) which manifests itself in the form of a dress and a crossed keys tattoo at the back of their hand with each key representing the Celestial Spirit Gate Keys of the Star Dress Forms that are being merged together.[3] 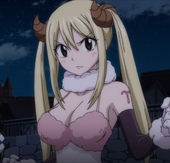 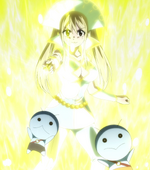 Retrieved from "https://fairytail.fandom.com/wiki/Star_Dress?oldid=1021923"
Community content is available under CC-BY-SA unless otherwise noted.