Solid Script ( Soriddo Sukuriputo) is a Caster Magic and a form of Letter Magic that uses animated words.

The user materializes solid words in their depicted form (i.e. writing "fire" would create fire) and then throws them at the opponent.[1] In the Miss Fairy Tail contest, Levy has been shown to be able to turn the words into the actual substance but still maintain the actual word form.[2] The words that she produces actually mimic the properties of the aspect they were based from.[2] For example, Gajeel was seen being able to consume the word 'iron' that Levy supplied him to replenish his energy.[3] Solid Script can also be used to counter similar types of Magic, as Levy has seen to be able to disrupt Freed's runes and Yomazu's Orient Solid Script skill.[4] Levy's analytical nature and aptitude for interpreting languages have allowed her to adapt her Magic to a variety of situations.[3] The letters written with Solid Script are written in English.[2] The user can also combine different spells to form into new and more powerful spells.[5] 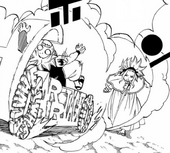