Snow Magic is a form of Magic that revolves around the creation, manipulation and control of, snow. The user of this Magic can release snow from their body and manipulate it,[4] or they can use this Magic to alter the surrounding climate, depending on the situation.[5] This Magic can be used for various purposes, but it's mainly used in battles.[6] The form of the snow depends on the user and can take many forms, such as snowballs, avalanches, blizzards or snowstorms.[7] 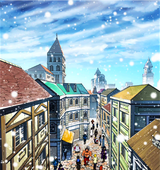