Sky God Slayer Magic incorporates the element of air into the user's body, allowing them to produce black whirlwinds from various parts of their being,[1][2] which are mostly used as a means of offense.[3][4] Similar to Sky Dragon Slayers, the user is able to consume air to replenish their strength.[5] The user is also able to cast healing spells,[6] with the caster even being able to use these spells on themselves, as demonstrated when Sherria Blendy's wounds disappeared after being hit by Shattering Light: Sky Drill.[7] A Sky God Slayer's healing spells, however, are noted to be unable to restore any internal fatigue or stress the body has been put through beforehand, which, in turn, must be restored naturally.[8] 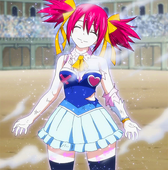 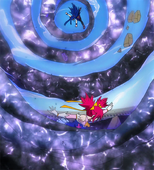 Retrieved from "https://fairytail.fandom.com/wiki/Sky_God_Slayer_Magic?oldid=967111"
Community content is available under CC-BY-SA unless otherwise noted.