A Magic which allows the user to transform their physiology into that of a Shadow Dragon, turning their body into a shadow that cannot be touched by normal means.[1] With this Magic, the user is also able to fade themselves into shadows to move swiftly, dodging efficiently and making surprise attacks. However, if the user is caught while in a tangible form, or by another person in shadow form, they are then vulnerable to attack.[2][3] While they are in shadow form, the user's senses are heightened to a large degree, and they are still able to see as if they were above ground. According to Rogue Cheney, for one to enter their own shadow, they must "feel" gravity to the point where their legs feel as one with the ground, thus allowing them to sink. As such, Gravity Magic and its variants can be used as an alternative to novice users attempting to enter their shadow for the first time.[4]

The shadows produced by Shadow Dragon Slayer Magic are able to be utilized in several different ways, allowing for a high level of adaptability; the shadows are able to be released in free-form,[5] as condensed,[6] or even molded into the shape of a weapon, taking on the properties of said chosen shape.[7] 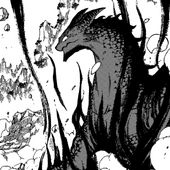