Reflector ( Rifurekutā) is a Caster Magic that relies upon varying degrees of distortion.

Reflector is a form of Magic which enables its user to twist and distort almost anything.[3] It can affect both material things, such as metal,[4] and intangible entities, such as air[1] and light.[5] Such Magic possesses both great offensive and defensive capabilities: by refracting air, the user is capable of generating highly-destructive flying slashes of various sizes, which possess great cutting power.[1][6][7] By twisting anything entering the immediate area surrounding them, the user becomes virtually immune to any attack, be it physical or magical in nature, with every incoming spell or melee assault having its trajectory moved in order to avoid striking the user,[8] who can even reflect these attempts back at their originators.[9] By refracting light, the user is even capable of generating illusions,[5] going as far as to twist reality itself in the eyes of their opponents.[10] Even objects and magics that negate magics fall victim to the Reflector.

Reflector appears to be a very powerful form of Magic, with even Jellal Fernandes, a former member of the Ten Wizard Saints, praising it.[5] In spite of its undeniable advantages, however, this Magic suffers from several drawbacks:

Reflector can also be used in conjunction with other forms of Magic: by employing it alongside Darkness Magic, Macbeth was able to surpass the repelling power of Dan Straight's shield Ricochet by reflecting back the spell it had just repelled; he used a similar combination when pitted against Byro Cracy, refracting the range of the man's Nullification Magic and then assaulting him while he was temporarily defenseless with his Darkness Magic.[14] 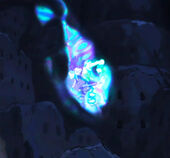