Rainbow Fire ( Reinbō Faia) is a Caster Magic and a variation of Fire Magic.

A variation of Fire Magic in which the user creates flames with a variety of colors, with each color having a particular effect or property. For example, the user can create a blue flame which is cold, an orange flame which gives off a foul odour, among others.[1]

This Magic also allows the user to control other flames, giving the user an advantage over other Fire Magic users.[2] However, if the opponent has complete mastery over their fire, then the user's pyrokinesis would not work against the opponent's flame.[3] 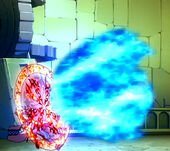 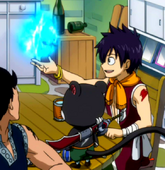