Plant Magic (植物の魔法 Shokubutsu no Mahō) is a Caster Magic related to the use of plants.

It is a Magic which allows the caster to create and/or control rapid-growing plants to battle. These plants are grown with various properties unlike regular ones. They have enhanced abilities that can be used in various ways during combat.[5] As plants are a main element in this Magic, the caster can summon anything, from vegetables to large carnivorous creatures[6] and can even utilize it as a shield to protect their self from assault.[7] Also, Arcadios stated that this Magic (or at least the variation of it that Cosmos uses) was specifically designed in order to kill people.[8] 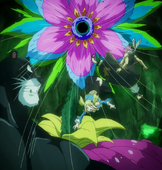