The Phantom Lord Guild ( Fantomu Rōdo) was one of the strongest guilds in Earth Land, before its disbandment.[2]

Phantom Lord, unlike most other guilds, possessed multiple buildings and branches, one of its representative bases was situated in Oak Town,[3] and its real headquarters was located in the countryside again not far from Oak Town.[4]

Geoffrey, former Guild Master of Blue Skull and Phantom Lord's founder, decided to create the guild in the year X686. He founded Phantom Lord because he wanted a guild that could stand against Fairy Tail because he held a grudge against its four founding members: Mavis Vermillion, Precht Gaebolg, Yuri Dreyar, and Warrod Sequen.[5] Phantom Lord was already renowned several years before the rise of Fairy Tail, although Fairy Tail eventually came to be considered the strongest in Fiore.[2] The rivalry between these two guilds was reignited in the year X778 during the annual meeting of the Guild Masters. After the Masters had gotten a bit drunk, Makarov Dreyar, Fairy Tail's Master, started bragging about his guild and all of the Mages part of it. This caused the similarly drunk Jose Porla to try to compete his guild against Makarov's. Eventually, Jose began to bad-mouth Fairy Tail, something which angered Makarov, with the both of them starting to fight. The battle ended with Makarov the victor and Jose beaten badly, resulting in Jose never again attending a regular meeting, and in the beginning of his never-ending hatred towards Fairy Tail and of his guild's rivalry with it.[6]

Phantom Lord was a renowned guild, said to possess unsurpassed Magic, skills and resources, and was considered to be as powerful as its long-lasting rival, Fairy Tail.[2] Despite this being untrue, with it having eventually succumbed to Fairy Tail during the Guild War that Phantom itself had started, it was still a considerably powerful guild. Its Guild Master, Jose Porla, a former member of the Ten Wizard Saints,[7] was said to hold an amount of Magic Power equal to Makarov Dreyar's[8] and was able to easily overpower a Mage of Erza Scarlet's caliber, although she was already critically injured when facing him,[9] while at the same time remotely overpowering the majority of Fairy Tail's members through his shades. The guild's ranks counted five S-Class Mages: Aria, Juvia Lockser, Sol, and Totomaru, who made up the elite team Element 4, while Gajeel Redfox, acting on his own, was said to be the most formidable member under Jose himself and was fearfully reputed for his use of Iron Dragon Slayer Magic.[8] Said group did not seem to be as powerful as Fairy Tail's own S-Class Mages, considering that their defeat happened when Fairy Tail's top members Gildarts Clive, Laxus Dreyar, and Mystogan were absent,[10] but could nonetheless hold its own against Mages considered worthy of the S-Class,[11] namely Natsu Dragneel,[12] Gray Fullbuster[13] and Elfman Strauss;[14] the first one, who has proven himself on several occasions as particularly strong even among the top S-Class candidates of Fairy Tail, was also brought on the verge of defeat first by Aria,[15] and later by Gajeel.[16] Phantom Lord was also said to have a lot of members, likely more than Fairy Tail itself.[7]

Phantom Lord's headquarters came with a series of remarkable mechanical devices. It could sprout gigantic legs to be moved around in midair, crossing over long distances.[17] In addition, it came equipped with specific features thought for battle, which made it a real, dangerous weapon capable of mass-destruction. Such features included a built-in Jupiter cannon, capable of firing powerful beams of compressed Magic[18] at given intervals of time,[19] and, most notably, the possibility to turn the whole structure into a gigantic robot,[20] which, surprisingly, was a Mage itself, able to cast a spell as powerful as Abyss Break.[21] 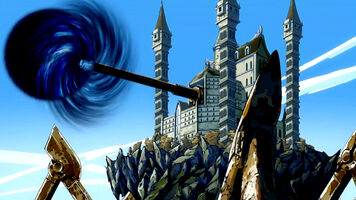 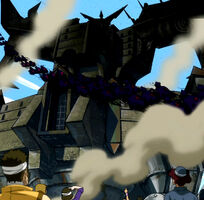