It is a coffin-shaped box which is purple in color with gold-colored outline. On the front of the box is a white skull, wearing a bow on its head, and two white triangles. The larger of the two is facing upward and has a red heart in the center of it, while the other is skinnier and facing the opposite direction.[1] On the cover of the box is a small piece of paper that says, "The Method Actor Box. Transform yourself and journey into the land of consumed fantasy." In addition, there is a round dial underneath it on the wall.[3]

In the anime, the skull does not wear a bow on its head and there appears to be a curtain-like cloth inside the box, compared to the simple and seemingly empty interior it has in the manga.[2]

Clothes Transformation: The abilities of the Method Actor Box allow a person to change their clothes instantaneously by merely twisting a dial on the box. The clothes all vary in appearance, ranging from Arabian-style dancer clothes to Japanese yukata. Equipment, such as water floaters, can be additionally provided. However, most of the outfits in the box appear to be suited for females rather than males.[4] This is reinforced when Natsu, a male, is consistently outfitted with feminine clothes after Lucy pushes him into the box and fiddles with the dial.[2] 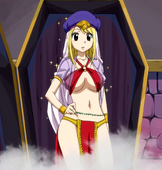 Retrieved from "https://fairytail.fandom.com/wiki/Method_Actor_Box?oldid=1023483"
Community content is available under CC-BY-SA unless otherwise noted.