Memory-Make is a type of Magic which grants the caster the ability to manipulate memories. It also gives the user amazing memory capacity, being able to memorize opponent's heart beats, footsteps and Magic. The caster can also create "memories" of themselves which are similar to holograms. This Magic also allows the user to create new Magic spells by combining spells from other Magic which the user has memorized before. Furthermore, the user is able to negate Magic spells used by the opponent which the user also had already memorized by "forgetting" the spell.[1] Unlike Ice-Make or Wood-Make, the caster does not need to place their hands into complex positions but merely places their fingers on the temples of their heads as a focus point and a chain of memories could be seen visible behind the user.[2] According to Mavis Vermillion, this Magic is a type of Ancient Spell.[3]

Memory-Make: A Night of Falling Stars 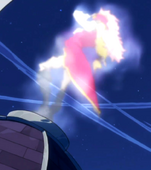 Memory-Make: Karma of the Burning Land