Magic Card ( Majikku Kādo) is a Holder Magic involving the use of Magic Cards to produce various effects.

Magic Card is a type of Holder Magic which revolves around the use of Magic Cards, which can produce a variety of effects,[2] such as generating elements,[3] and even seemingly living beings.[4] Magic Card can be used for offense by employing the cards used for this Magic as long-range weapons by the user throwing them at their enemies. Users of this Magic can also combine their cards to generate particular effects.[2] Aside from combat, Magic Card seems to possess other avenues for usage: users can apparently track down people to some degree through the cards' use, as shown when Cana Alberona placed several of them on the ground in an attempt to pinpoint Mystogan's location, but to no effect, leaving the effectiveness and the conditions of the cards' tracking power unknown.[5] In addition, the cards can reproduce the effects from a variety of different forms of Magic, such as Water Magic[3] or Sleep Magic,[6] coming in as very versatile, if used the right way. These cards can also be linked to specific individuals, allowing the user to gain information about their status[7] and location,[8] as well as to communicate with them.[9] Users of this Magic also have the ability to trap individuals inside their Magic Cards, as demonstrated by Shô. However despite being trapped in them, the figures inside can still interact with those on the outside to an extent, such as when a casino patron was able to use his knife and cut Lucy Heartfilia's bonds.[10] 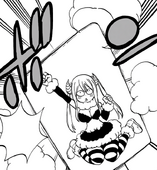