The Ishgar Magic Council's first headquarters was located within Era, overlooking a large open space, with some buildings visible a bit away from it, on both sides, separated from the headquarters by two lines of trees. In front of the structure, standing at both sides of the large road leading to the building's entrance, were two meadows marked by bushes,[1] and well as several statues, portraying winged, bare-breasted women with flowing clothes circling their waists, their arms crossed in front of their chests.[2] From the Council's meeting area, many buildings were visible below,[3] and a series of snow-capped mountains sat in the background.[4]

The Council's new building seems to be placed out of the main built-up area, being surrounded by thick vegetation, and having a large lake sitting in front of it, with a ship docked not far from the building. Behind the structure, a series of mildly short mountains is visible.[5]

The original building's appearance was that of an imposing palace, composed of both pure white stone and light blue bricks, with large, elongated windows with arched tops being placed over its walls, some complete with glass, others hollow. The front part is a large facade, dominated in its center by the entrance, consisting of a double door topped by a pyramid-shaped roof, adorned by a bas-relief portraying a naked male figure taking the hand of a naked female figure, with a large shell being placed behind them. This roof was sustained by two massive, rectangular structures, plus a smaller pair of columns directly at the door's sides. Leading to the door itself was a staircase, split in two by a concave part in its center. At the entrance's sides, linking it to a pair of simple, rectangular towers, were two colonnades. Towering above the entrance were three balconies, with their lower parts partially hidden by the entrance itself; the central one was topped by a roof similar to the one topping the entrance, similarly adorned by a bas-relief, this one portraying the Council's ankh-like symbol,[3] while the side ones were less imposing, consisting just of large, rectangular windows complete with light blue curtains. Sitting at the outer balconies' sides were two imposing, rectangular towers covered in hollow windows, with pitched roofs consisting of light blue tiles, and sections protruding outwards in the central part of each of them. Two more, similar towers were visible on the backsides of the building. In the building's center, surrounded by those four towers, was a round one, with its conical, tiled roof topped by a high, slender, golden decorative structure, extending several meters up in the air, and having curved protrusions jutting outwards from it.[1]

Being the headquarters of the Magic World's rulers, the building seems to possess imposing and majestic interiors: the Council was shown gathering in a large, open-air space, a massive balcony covered by a roof held up by columns and arches, with railing visible on both sides. The whole space was built of azure stone, and it was given access to by a battlement, with the stairs leading to it being flanked by a pair of statues portraying hooded women covered in dresses, wielding what seemed to be rudimentary axes or pickaxes; sitting between some of the columns near the entrance were small tables with flowerpots on them.[6] Among the columns, sitting on a light blue carpet with golden edges, flanked by gray, rhomboidal squares, was the round, azure table which housed the Council's meeting, with each councilor sitting on an armchair, these having white and golden frames and azure stuffing. Near one of the railings was a small table which seemed to have a buffet sitting on its white tablecloth.[4] The councilors' armchairs were later replaced with chairs with overly long, arched backs, with the stuffing being covered in a rhomb pattern.[3]

Somewhere in the building sits a mildly large library, with long bookshelves packed full of books, here and there alternated with panels adorned by triangular, highly decorative shields, being placed both on the first floor and on a mezzanine, complete with a decorated railing, reachable via two sets of stair sitting at both sides of the room. In the library's center was a large, rectangular table with intricately decorated edges, on which a crystal sphere reminiscent of Lacrima and two pots with plants in bloom sat; by the table was a stuffed chair with an intricately adorned back, with a small mobile, reminiscent of a food cart, housing a tablecloth, a bottle and a glass.[7]

Somewhere in the building, the Council's ultimate weapon Satellite Square: Etherion is stored. The room meant for its storage was given access to by a large hall adorned with pillars, with the arched double door leading to it from the hall being dark and intricately decorated by a large motif, which incorporated a pair of large wings with two staff-like objects, ending in fleur-de-lis-like edges; such door was shown to be guarded by two sentinels, which wore hoods, were clad in robes and held staffs reminiscent of crosiers. Behind the door, the room containing Etherion was shown to be extremely high, ending in a round dome and sporting flat pillars which curved inwards with the dome itself, plus intricately decorated sections almost on top, where the dome itself got smaller, taking on a cylindrical shape. Several meters from the ground, along the walls, there were open sections from which observers could assist to and coordinate the preparations for the firing of Etherion. Such balconies came complete with railings and rectangular pillars holding their coffered ceilings up.[8] Throughout the room, technological-looking magical equipment was placed, used for the firing of Etherion and the analysis following it.[9]

Following the firing of Etherion at the Council's hands, an action which was meant to destroy the Tower of Heaven but instead granted it a huge amount of Magic Power, Ultear Milkovich, who betrayed the Council alongside her senior Siegrain, best known as Jellal Fernandes, prompted the hall in which Etherion was held to collapse through the use of her Arc of Time Magic, presumably causing the destruction of the rest of the building as well.[10]

After the Council had been reformed due to a personal request of the King of Fiore,[11] a new headquarters was built to house it.[5]

The Council's second building is shown to have a very large facade, with the main part of the headquarters being flanked by two wings, further elongating the facade in its whole. The main section possesses a huge entrance topped by a pyramid-shaped roof and by a high, decorative part above it, with its arched top ending in a rose window. Sitting above the arch is another pyramid-shaped roof, which has a long pole protruding upwards from it, this being circled by a floating, halo-like object, with similar exemplars being placed elsewhere in the building. The rest of the main part's facade is covered in a multitude of elongated windows, with some of them, protruding outwards, being also present on the lower part of the pitched, tiled roof. Flanking this central section are two massive, round towers, which seem to have rather small lower sections and get larger near their center, where they also gain intricate decorations adorning all of their upper part, reaching up to the pointed tiled roofs, whose summit is circled by more halos. Extending sidewards from the towers are the wings, reminiscent of walls adorned by windows, getting gradually shorter from the towers at their sides to their central parts, in a way reminiscent of a staircase, and then gradually growing again in an arch as they near the outer edges, ending in elongated, slender towers, with two more towers not unlike those being visible on the back of the building.[5]

Inside the circle of walls is a majestic courtyard, which is adorned by short, well-kept hedges and bushes, as well as by a multitude of statues, each portraying an armored knight armed with a spear riding on a rampant horse; another statue, portraying a woman clad in a long robe, sporting an intricated headgear and reading from a scroll, stands in a small, round area, and, roughly in the center of the courtyard, is a mildly small, highly decorative sculpture portraying a woman and a child surrounded by waves, together with what looks like a dolphin. Overlooking such environment, standing along the walls, several meters above it, is an elaborated, open-air corridor, complete with decorative arches and columns, attached to which are banners sporting the Council's symbol.[12]

Inside this headquarters, the Council is shown meeting inside a smaller, less imposing room, possessing a staircase leading up on an extremity, and seemingly having another one leading to the room from below on the opposite extremity, something shown from the curved balustrade on such side. The roof is a dome, the walls are intricately decorated, and windows are visible in them. The room's floor is covered in a distinctive chess pattern, and the councilors gather around a table which is way smaller than those their previous colleagues used, aside from being rectangular instead of circular. The chairs near it are reminiscent of those the first Council used to sit on after giving up armchairs, possessing elongated, stuffed backs, which, however, are now complete in their highest part with an intricately decorated round section. Not far from the table, near the balustrade, is a smaller, round table, adorned by a flowerpot and surrounded by three little sofas, with another flowerpot being visible between two of them, and a curious structure, reminiscent of a large jar on a pedestal, complete with what look like four lamps, sitting in the proximity.[13]

After the Grand Magic Games of X791 concluded, the Council headquarters were once again destroyed when the building was raided by Jackal of the Nine Demon Gates of Tartaros, who used his Bomb Curse to not only blow the building to pieces, but also assassinate all of the Council members, murdering and wounding over 119 people.[14]

The firing of Etherion from the first building at the hands of the previous Council was of great importance for the events of the Tower of Heaven; such action also prompted the first Council to be disbanded, only to be reformed again later with totally new members (aside from Org) and Gran Doma as the Chairman.[11] The new, stricter Council, despite Org's protests, made the resolution to disband the troublemaker Fairy Tail guild if it was to commit another violation;[15] a goal the former Council never managed to achieve.[16]

In the manga, the Council members are shown to have their reunions in royal rooms, around simple table, complete with chairs for them to sit on;[4][17] in the anime, however, the meeting room was initially portrayed as a massive Magic circle that the Council members stood around;[18] later on, after the Council was created anew, its members were shown meeting in an even stranger, immense hall, containing four statues placed in a pool of an unknown liquid, with each Council member standing on the hand of a statue. The Chairman himself stood on a high pillar emerging from the water, surrounded by the other councilors. The anime drastically changed the appearance of the Council's second building as well, portraying it as a gigantic green crystal sitting on a series of high, mechanical-looking poles.[19] 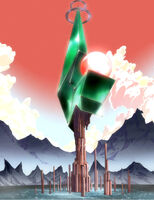 Retrieved from "https://fairytail.fandom.com/wiki/Ishgar_Magic_Council_Headquarters?oldid=1014478"
Community content is available under CC-BY-SA unless otherwise noted.