The Infinity Clock (無限時計 Mugen Tokei)[1] is a Magic Item and secret property of the Zentopia Church that was dismantled into six pieces and scattered in places that were sealed by Zentopia.[2] The Infinity Clock was also known as the Infinity Castle a long time ago.[3]

The Infinity Clock is an ancient clock that has secret Potamelian inscriptions on the individual pieces. The clock has two rings around it and has Roman numerals on its dial. The clock has four legs to stand on and its dial is surrounded by two circles. The clock can ring like a pendulum clock, making a very loud sound that can be heard even at great distances. The true form of the Infinity Clock looks like a giant mechanical fish.[4]

The Infinity Clock is able to unleash the terrifying Magic called "Real Nightmare" (リアルナイトメア Riaru Naitomea), a Magic that greatly distorts the perception of time for people, bringing them madness and creating chaos among the population.[5]

To prevent the usage of this terrifying magic, Will Neville used Organic Link Magic to seal it, using his students as the keys. This seal was placed on his students, and upon their deaths, their Magic transfers to their inheritors. The only way to break the seal is to stab one of the seal-holders with an Anti-Link dagger.

The Infinity Clock belonged to Zentopia a long time ago and it was sealed away after it was proved to be a dangerous artifact, able to unleash chaos into the world. The Infinity Clock was dismantled into 6 pieces, with each of them scattered and hidden in abandoned areas such as an underground church, ruins, underwater, magical library, and ruins underneath a mountain.[6] The last piece, the Clock hand, was discovered by the Archaeological Society in a ruin, but somehow had fallen into Jude Heartfilia's hands. Jean-Luc Neville somehow managed to get in touch with him and Jude promised him that he will seal the Clock hand away in another safe location.[5]

The clock was dismantled into six pieces (the hand, the engine, the bell, the legs, the circles, and the face) and were hidden. The Clock hand was the first to be discovered. 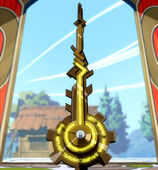