A form of Magic that revolves around the use of illusions, allowing the caster to create illusions that deceive even respectable Mages of the Ten Wizard Saints and Magic Council Captains. The user can also determine who sees and hears the illusions and who doesn't. The Magic has quite a large range, as seen when Ivan Dreyar was able to trick the entirety of the Grand Magic Games audience into seeing a false fight between him and Laxus, as well as hide him and the other Raven Tail Mages.[2] Similar to Memory Control and Charm, when a target or the caster themselves becomes aware of an illusion casted on them, the effects of the illusion will begin to wear off and disappear.[3][4]

The more advanced illusionist mages are capable of creating individual illusions that possess their own personality and feelings or at least mirror those they're copying, this was thought be an extremely frightful level of magic even by Jura Neekis.[5] In addition, each illusion can possess a physical form, and capable of doing lifelike things such as performing Magic and inflicting real damage.[6] 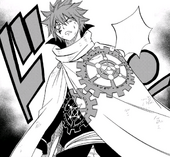