Human Possession (人形憑 Hitotsuki) is a Caster Magic and one form of Seith Magic and Black Magic.

A type of Seith Magic that allows the caster to seal wandering souls inside objects and manipulate them as they wish.[1] The so-called "dolls" which are produced by this union can serve a variety of purposes, such as offense,[2] defense[3] and even transportation.[4]

They are capable of freely floating and maneuvering in the air, and their main offensive ability consists of firing barrages of powerful blasts, which possess enough force to generate explosions of various sizes, and is particularly destructive if all dolls focus their assaults on a single point.[2] They can threaten and confuse foes by flying around them, as well as physically assault them by throwing themselves against targets using the momentum gained from their flight, being capable of triggering melee barrages of attacks from every direction;[5] in addition, the user is able to deprive foes of objects through their use, as shown when one doll stole Celestial Spirit Gate Keys from Lucy Heartfilia,[6] and can combine them in different "formations" to perform particular actions, such as more powerful attacks.[7] The souls used aren't bound to the specific dolls he chooses to insert them into, meaning that the user is capable of changing their containers at his whim: this comes in handy if, for example, the opponent does manage to incapacitate their usual container.[3] So far, the user has always been shown controlling five dolls at a time; his standard dolls are quite small in size, appear to be made of wood, and are reminiscent of tribal totems, each possessing a colored face and little wooden wings at their sides.[8] Aside from such dolls, the use, implanting and controlling of full size mannequins[9] and toys[10] has also been seen. Human Possession also grants its users the ability to see human souls, something which, according to Bickslow, allowed him to determine that Loke wasn't a human long before Lucy discovered his identity as a Celestial Spirit.[11] 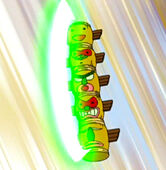