Grimoire Heart ( Gurimoa Hāto) was one of the top three Dark Guilds that the Balam Alliance was comprised of,[1] as well as the one commonly considered the strongest Dark Guild.[2] The guild owes its name to the Devil's Heart,[3] an organic device which is the source of Guild Master, Hades' immense power, kept inside the guild's airship.[4]

When Grimoire Heart first appeared in the story, their goal was to acquire all the keys rumored to be used to unlock Zeref's seal,[5] as well as to locate the Black Wizard himself. Once these goals had been achieved,[6] their intention was to use him, discovered in a slumbering state on Tenrou Island,[7] to rule a world (referred to as the Ultimate Magic World)[8] where humans who cannot use Magic (90% of the human population) would not be able to survive.[9] Due to the Fairy Tail guild's presence on Tenrou Island when Grimoire Heart decided to make the move to unseal Zeref, one of its goals was also to get rid of "Fiore's #1 guild" in order to reach Zeref;[10] a goal which, before finding all of the keys, they were also willing to leave to others, such as the fellow member of the Balam Alliance Oración Seis.[11] The Dark Guild also had Ultear Milkovich manipulate the Cult of Zeref to have them act as a distraction so that Grimoire Heart could more easily achieve their goals.[12]

Grimoire Heart doesn't seem to have any stable location. Its members live and travel on a giant airship that flies high above the land. Because of this, it is an elusive guild.[13] Among other things, the airship housed the Devil's Heart, Master Hades' source of power.[4]

What is known of Grimoire Heart is that its founder and original Guild Master, Hades (real name Precht), was the Second Guild Master of Fairy Tail, and was made such by Fairy Tail's founder, Mavis Vermillion. In year X736, he bestowed the title of Third on Makarov Dreyar so that he could go on a journey.[14][15] On this journey, Hades traced back the origins of Magic to Zeref, and saw what he referred to as the "essence of Magic". It is assumed that he turned "evil" after this point, and that he created Grimoire Heart and became its Guild Master in order to awaken Zeref and make the Ultimate Magic World real.[16] Hades proceeded to gather young boys and girls with strong Magic potential, such as Ultear Milkovich,[17] and spent years raising and training them for them to become the Seven Kin of Purgatory, some of the greatest Mages under his command. These Mages use a variety of different types of Magic that are as close as possible to the source of all Magic, taught to them by Hades himself: Lost Magic.[18]

In X784 the guild was defeated in conflict by Fairy Tail, though remnants of the guild remained active through to X791.[19][20]

As a member of the Balam Alliance, Grimoire Heart is acknowledged as one of the three most powerful Dark Guilds in Earth Land.[1] Even among them, it was stated to be the strongest one by Levy McGarden[2] and also later by Franmalth,[21] and one of the three greatest protuberances of the Magic world (alongside Fairy Tail and Zeref) by Lahar.[22] Unlike the Oración Seis, and similarly to Tartaros, Grimoire Heart has far more than six members, having several core members[23] as well as numerous members of lesser rank.[24] Many of its most prominent Mages have been shown to be incredibly powerful, and when they arrived to fight Fairy Tail on Tenrou Island they managed to battle and even defeat some of its top Mages. Its Guild Master, Hades, was able to defeat Makarov Dreyar, Fairy Tail's Master and one of the Ten Wizard Saints, with ease,[25] and to similarly keep the upper hand over both Fairy Tail's Team Natsu[26] and excommunicated S-Class Mage Laxus Dreyar,[27] eventually being defeated by them just due to external intervention.[28] The Deputy Commander of the guild, Bluenote Stinger, was able to fight on almost equal grounds with Gildarts Clive, Fairy Tail's Ace,[29] and all members of its strongest team (the Seven Kin of Purgatory) have proven themselves to be of S-Class level strength. Azuma, in particular, even managed to combat powerful Fairy Tail's S-Class Mages the likes of Mirajane Strauss[30] and Erza Scarlet on equal grounds.[31] Even two "minor" members such as Yomazu and Kawazu, through their combined efforts, were shown keeping up with an S-Class level Mage like Gajeel Redfox for a certain amount of time.[32]

However, after their defeat at Fairy Tail's hands, Grimoire Heart's strength lowered significantly: three of their top members, including Hades himself,[33] were killed,[34][35] one was incapacitated,[36] and two (technically three, seeing as Capricorn was being possessed by Zoldeo)[37] of them defected from the guild.[38]

Grimoire Heart has two powerful Magic spell associated with the Guild in which the Guild's founder created by reproducing a malefic version of one of Fairy Tail's great Magic spells, Fairy Law[39] and an inferior version of Fairy Heart.[40] 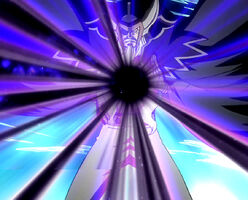 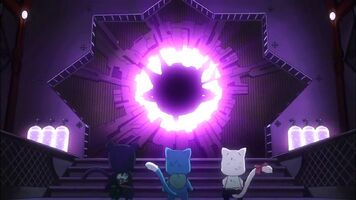 As a Dark Guild that supports one corner of the Balam Alliance, Grimoire Hearts is shown to possess an advance machinery equipment where they are constantly moving in their flying fortress which was said to be heavily armored[41] while also possessing the powerful Magical Cannon, Jupiter.[41] 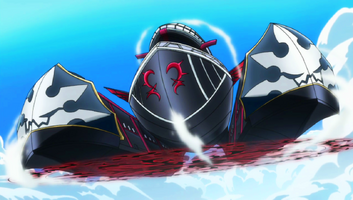 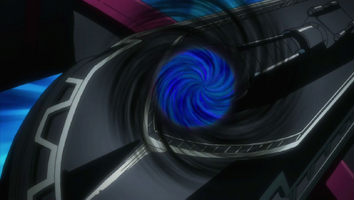