Ghost Dragon Slayer Magic is a form of Dragon Slayer Magic that allows its user to generate, manipulate, and presumably consume (like other forms of Dragon Slayer Magic) the element in question, which in this case are ghosts. With this Magic the user gains a ghostlike ability to not be heard or seen by anyone other than a Dragon or a Dragon Slayer.[1] The user can also attack their target with the souls of the dead,[2] remove soul essence from others' bodies, becoming intangible like a ghost, giving them an immunity to any attacks.[3] as well as having the ability to possess anyone.[4] 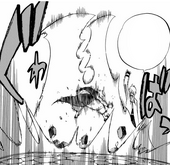 Retrieved from "https://fairytail.fandom.com/wiki/Ghost_Dragon_Slayer_Magic?oldid=1006843"
Community content is available under CC-BY-SA unless otherwise noted.