Fire Dragon Slayer Magic is a type of Dragon Slayer Magic that grants the user various characteristics typical of a Fire Dragon: lungs capable of spewing flames, scales that grant protection against fire, and nails covered in flames. Consequently, Fire Dragon Slayer Magic allows the user to produce and control fire from any part of their body, which can be used both in melee and as a ranged form of offense.[1] The generated flames can be manipulated in a wide variety of ways, their “type” can be changed at will, and they can even be given a material consistency.[2] Such fire seems to have a “blunt” effect to it, seemingly causing bludgeoning damage alongside burning.[3] Flames produced by this type of Magic provide much more heat than standard flames. The user’s body temperature is capable of melting iron, burning off poison and stigmatas.[4] The users flame are directly connected to their feelings, meaning the more emotional they get, the warmer their flame will become; this effect is referred to as “Flames of Emotion”.[5]

In addition, the user can consume external sources of fire to restore their body to a healthy state and regain their reserves of strength, something that also makes them immune to most types of fire, due to their capability of nullifying fire-based attacks by sucking them in and eating them; the consumed fire also seems to possess a different “taste” according to its “quality”.[6] However, the user can’t eat their own flames, or things set on fire by them, to reinvigorate themselves.[7] While classes of flames that are “higher” in rank to those produced by this type of Magic (like those employed by a Flame God Slayer) can’t be eaten directly and will therefore damage the user, momentarily self-nullifying all of the user’s Magic Power will grant them enough room to consume and even use such flames.[8] According to Zancrow after consuming it, he describes it as flames that are rough but will never burn out.[9]

Get Out of There 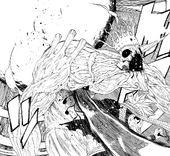 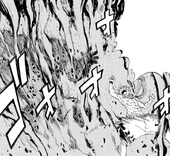 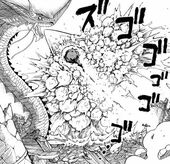