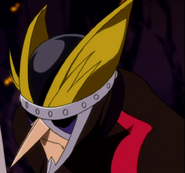 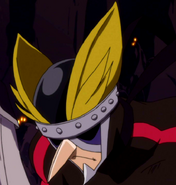 Neutral - agreed with with

Support - Look, somewhy they made this guy a kind of a zombie or something (maybe because he's supposed to be dead) so his angles are weird, with him looking to the ground. I don't like them neither, but I hate more the idea of spend a week without an upadated profile pic, even if it's anime crap. I vote for the First One. Herme 06:16,7/21/2012

Support - Prop 1... Both pics are not that good but I think Prop 1 would be better for the time being Gildarts Clive

What about Prop 3... He looks weird in ALL of them tho so I

Support - Would need to be replaced as soon as possible, but, for the time being, I think we might go for Proposal 2.

Support - We can always change it when we find a new better one. So I pick #2 for now :D.

Support - TBH I don't think any of them is good one. But I support 2. Ishthak

Support - The current picture shows only the face and from the side, which is obviously not suitable for a profile picture. The ones that I purposed might not be super suitable, but they're much more suitable than the current one. The difference between the two of them is the saturation level. I prefer #2. NickDibuv (talk) 19:33, August 18, 2012 (UTC)

Oppose - Their an ok pictures... but they would be horrible for a profile pictures. Lizzy

Oppose - The proposed are awkward and he's too far away anyway. Suzaku 鈴の朱雀

Oppose -Let the current one stay as it is...†○† The Venerable Bede †○†

Oppose - current one is much better... Gildarts Clive 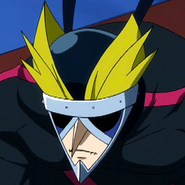 Support -After many weeks, finally there is a good pic of Racer's face. Relikz

Support - Better than the current. Lizzy

Neutral - Hmmm..I can say both of them are good but the current one is great but the prop is also legit..neutral for now

Oppose - Seems kind of blury to me. :/ Suzaku 鈴の朱雀 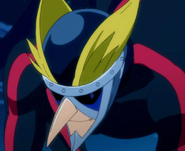 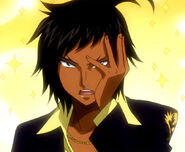 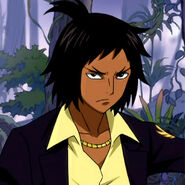 Support - WAY better than the current one 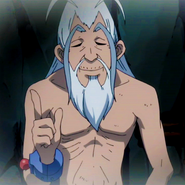 Support -I agree with Ish and Misko.

The guy who protected Erza, and then turn into ash or something. I found his pictures cleaning Erza's gallery... Ishthak

I think he was being ironic there... :P

My little Abe can be ironic? Cute. Pokemon Master, huh... What he was doing with them, that he take him to the ToH O.o Ishthak

That's a good argument. I will accept it. Ishthak

Maybe he was searching for ghostly Pokemons... :P

Support - Likely someone distantly related to Yamamoto from Bleach...

Support - BJ said once: "I just think that a profile picture should be more on the face and the current one should just be moved to the appearance section" Herme 14:50,12/14/2011

Oppose - I don't see the point in doing so, you can see his face in the current one just fine.  Iam...JakuhōRaikōben 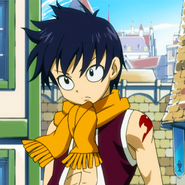 Proposal2
Add a photo to this gallery

Support - I suppose we could go with an anime version now, unless we want to wait for the time skip actually happen. Now I don't know whether you guys prefer the full-body version or the upper-body one. I'm fine with either one. Miskos3 14:23, January 14, 2012 (UTC)

Neutral - His hair looks really unnatural in both proposals. I think we should wait until the time skip to see if the animation of the scene gets any better, but if it's picked, I'd be fine.  Iam...JakuhōRaikōben  14:26,1/14/2012

Support - i think we must make like the other pages the anime version post and pre timeskip because we use the same pictures from the manga in the page is only a change from that pictures in the manga with the one of the anime Nitram86 14:32, January 14, 2012 (UTC)

Support - Guess we could go for the picture without the wind blowing... Though I think that we should keep a close up on his face as the Profile picture, and the image portraying his full body in the Appearance one, like we did for Bluenote...

On a side note, what the hell's up with Romeo's anime attire? The animators had too many colors in stock and decided to use all of them on his clothes? :P

Support - Proposal 2; I think it's better to have a close up of the face for a profile picture rather than the full body ;D Otaku Chick

Support - Prop 2 is just a full version of prop 1, but I think the profile picture should focus on character's face, thus the current one should go to the appearance section and I support prop 1 for the new profile image. Miskos3 Message 09:59, March 24, 2012 (UTC)

Oppose - I like current and I don't believe in the whole "full body should be in the apperance section and face shot in profile image".

Yeah, but that's a reason for a full-body pic not to be there, not simply because "full body should be in the apperance section and face shot in profile image"

as long as it makes sense to you...

I think it's logical having a profile picture focusing on character's face and a full body picture in the appearance section, at least I see it that way. It would also look better on the page, imo. Plus, in the current one, his head is in retarded angle. xD Miskos3 Message 17:13, March 24, 2012 (UTC)

Oppose - I agree with Rai and Reli.

Oppose - I think the current one is just fine Gildarts Clive

Retrieved from "https://fairytail.fandom.com/wiki/Fairy_Tail_Wiki_talk:Image_Gallery/Archive_R?oldid=386508"
Community content is available under CC-BY-SA unless otherwise noted.