Fairy Tail (フェアリーテイル Fearī Teiru) is a RPG video game developed by GUST Studios and released by Koei Tecmo for the PlayStation 4, Nintendo Switch and the PC.

The game ties in with several popular story arcs from the manga/anime series, including the Tenrou Island, Grand Magic Games, Tartaros, and Avatar arcs. The developers worked with author Hiro Mashima in order to ensure that the game felt true to the Fairy Tail series.[1][2]

Fairy Tail is an action-RPG game. The aim of the game is to restore your guild to its former glory. Initially you take control of Fairy Tail guild members as your playable characters that encompasses you to complete requests, strengthen friendships, and upgrade the guild’s facilities to increase the Guild Rank, as the guild's goal is to fight and prevail to become the number one guild in the Kingdom of Fiore.

This game is a turn-based combat system that uses four main commands (Magic, Attack, Defend and Item) that can be used in battle. Unlike its other game predecessors, it now features seven elements to the magic (Non-Elemental, Fire, Ice, Holy, Demon, Light and Dark) and are separated to different attributes so that one is weak, resistant, immune or can be drained to the other.

There is also the fairy gauge, that if it is filled completely, features a powerful option to unleash Magic Chain. This allows the player to cause a chain to continue by tagging the next character to attack consecutively right after another and can end it by a finisher, which stops the chain but ends it with a final, powerful attack without consuming much MP. If the chain has reach a specific number of chains, the finisher would become Extreme Magic, which is a more powerful version of the latter.

There are also other support functions on the battle such as the Rescues, which automatically activate when the player is in trouble, or exclusively during Grand Magic Games where certain characters will cheer for you and boosts your stat or heals your HP.

Lacrima are formed by through the Levy's laboratory by synthesizing foraged items and monster drops. These items and drops can be foraged throughout the map locations and defeating monsters in the game. They are separated to three categories; ones that can boost character stats, ones that inflicts status ailments to enemies and rare lacrimas (formed from recipes) that are only be equipped to one character. They are also ranked up to total of four, on which the higher number it is, the better quality of bonuses you can receive. The player can also recycle five lacrima of the same rank, an option to obtain a single lacrima of the next rank, though what kind and category would be random.

Consumable items are present in game to restore HP's, MP's, and status ailments, and can be obtained through treasure chests that are scattered through maps, or buying them from Lisanna's item shop. It is also possible to get both lacrima and consumable items from the guild's material storeroom which can be unlocked by progressing the story.

There is also a limited number of the valuable item called candies. They can be found throughout the map as well, but are most of them are often hidden through barrels and boxes on the map that has to be hit or attacked and interacted with. This special item is solely to be collected in bulk and be given to the Celestial Spirit Nikora at Lucy's house in exchange for lacrima repices not normally found anywhere else.

Guest Characters are non-playable characters that will instead join your party and automatically perform a range of powerful magic abilities.

Support Characters are non-playable characters that will appear and perform a range of powerful magic abilities.

Non-playable characters that appears (with avatar and voice) throughout the game. Often as enemies and bosses.

Other characters that appears as a visual illustration only and are sometimes voiced as the story advances.

Locations can be unlocked by progressing through the game in chapters. 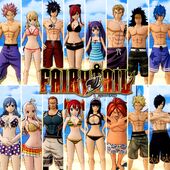 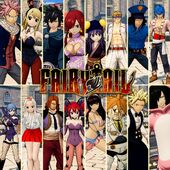 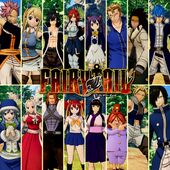