Fairy Tail ( Fearī Teiru) is the strongest guild in the Kingdom of Fiore.[1] It was originally disbanded in the aftermath of the Guild War against Tartaros,[2] however it was reestablished one year later by many of its more prominent members.[3] The name of "Fairy Tail" represents a sense of adventure for one to be able to discover more about mysteries and fate.[4]

Fairy Tail's original location was situated in the Kingdom of Fiore, on the southern coast of the country in Magnolia Town where it was the only guild[5] (until the arrival of Twilight Ogre). It was located in the south of the town not far from the coast, and the guild was situated about 4-5 kilometers up the Magnolia central path.[6] When the core members of Fairy Tail disappeared for 7 years, the remaining members could no longer afford to keep Fairy Tail's first building so it went into foreclosure.[7] After they left it, they moved into a small tavern, that lies on top of a small hill, and made it their base of operations.[8] Though upon arriving back in Magnolia town after their victory at the Grand Magic Games, the guild's first building has since been rebuilt in the center of the city by the people of Magnolia town as a reward for their victory in the Grand Magic Games.[9]

Fairy Tail has existed for at least several decades but has only grown to its current prominence and strength in the last few years. In this growth, it began to rival another large guild, Phantom Lord, and they began to be seen as symbols of the country.[14] When the core members of Fairy Tail disappeared, the guild dropped to last place in strength,[15] however, the core members returned seven years later.

In the Fairy Tail Guild, the Trial (S-Class Mage Promotion Trial) is an event that is held every year, where the Master selects the most prominent members to participate in a trial in order to be promoted to S-Class Mages.[16] Every year the trial is different and the venue also.[17] Current S-Class Mages also take part in the Trial, to increase the difficulty of the task and make the Trial even harder to complete.[18]

A parade held every year at The Harvest Festival where Fairy Tail Mages all display their Magic in a fantastical performance. The event is looked forward to not only by the members of Fairy Tail but by the whole population of Magnolia.[19]

Ultear Milkovich stated that Fairy Tail is the strongest guild in Fiore. She also commented that Zeref's retrieval from Tenrou Island could be problematic as Fairy Tail's main members were currently situated there.[23] Later, Lahar of the Magic Council notes that Fairy Tail is one of the three biggest protuberances of the Magic world, alongside Grimoire Heart and Zeref.[24] There are around 100 Mages in Fairy Tail.[25]

During the S-Class Mage Promotion Trial all of Fairy Tail's most powerful members, including its Guild Master, disappeared. After that incident, Fairy Tail's strength dropped significantly until the missing Mages reappeared 7 years later. Even though the lesser members grew stronger,[26] the loss of the core members still greatly affected Fairy Tail's strength, especially in comparison to guilds like Blue Pegasus and Lamia Scale, whose powers grew exponentially.[27]

After Mercphobia's defeat, Faris changed her plan of whiting out the remaining Dragon Gods with Mercphobia's power and decided to take control of the Fairy Tail guild since its combined power is equal to the Water Dragon God.[28]

In year X784, Fairy Tail was composed by roughly 100 members.[25] However, due to the events of Tenrou Island, the number of Mages was heavily reduced,[29] remaining quite scant even following the return of many of the guild's top members from the island itself, ranking in few tens.[30]

In spite of the guild's immense reputation and fame, becoming a member of Fairy Tail requires little more than the simple approval of the Guild Master, regardless of magical capabilities, former allegiances or the other members' opinion. This seems to be particularly true, as Makarov Dreyar had no troubles letting in Juvia Lockser, a former Mage of the Phantom Lord guild, which had started a Guild War with Fairy Tail and caused it great damage; Gajeel Redfox, another Mage from Phantom Lord who had badly injured Fairy Tail's Shadow Gear team and wreaked havoc on the guild's first building, was even invited into Fairy Tail by Makarov himself, with the Guild Master claiming that it was his duty to "guide young men who have lost their way back onto the right path".[31]

Mirajane Strauss, while talking to Lucy Heartfilia, explained that everyone in Fairy Tail carries the wounds of a sad past.[32]

Fairy Tail has four, powerful Magic spells associated with the guild. The first three are known as the "Three Great Fairy Magics"[33][34] while the fourth one is said to be a secret Magic superior from the three.[35] They are as follows: 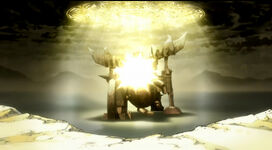 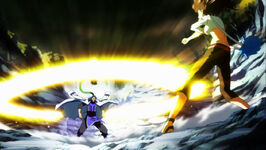 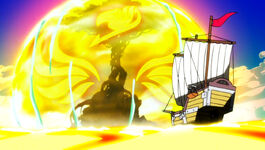 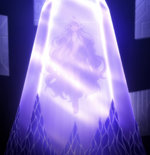 Fairy Tail obtained Phantom Lord's Jupiter cannon and converted it into a more compact version of the original with the same level of destructive power.[36] 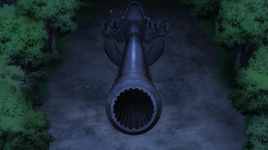